The above figure shows the symbol and structure of NPN transistor. In this structure we can observe the three terminals of transistor, circuit currents and voltage value representations. Now let us see the operation of the NPN transistor with explanation. 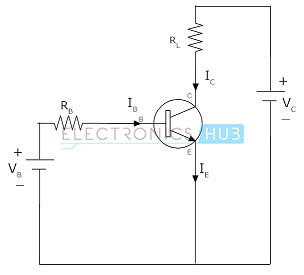 If the base voltage is equal to the emitter voltage then the transistor is in OFF state. If the base voltage increases over emitter voltage then the transistor becomes more switched until it is in fully ON state. If the sufficient positive voltage is applied to the base terminal i.e. fully-ON state, then electrons flow generated and the current (IC) flows from emitter to the collector. Here the base terminal acts as input and the collector-emitter region acts as output.

To allow current flow between emitter and collector properly, it is necessary that the collector voltage must be positive and also greater than the emitter voltage of transistor. Some amount of voltage drop presented between base and emitter, such as 0.7V. So the base voltage must be greater than the voltage drop 0.7V otherwise the transistor will not operate. The equation for base current of a bipolar NPN transistor is given by,

The equation for collector supply voltage is given as

Now let us see the relationship between the two ratio parameters α and β.

This current gain (α) value is very close to unity but less than the unity.
We know that the emitter current is the sum of small base current and large collector current.

from equation 2, the collector

The β value may vary from 20 to 1000 for low power transistors which operate with high frequencies. But in general this β value can have the values in between the range of 50-200.

Now we will see the relationship between α, β and γ factors.

We know that emitter current

Hence the relationships between α, β and γ are given as below

1. Calculate the base current IB to switch a resistive load of 4mA of a Bipolar NPN transistor which having the current gain (β) value 100.

2. Calculate the base current of a bipolar NPN transistor having the bias voltage 10V and the input base resistance of 200kΩ.

We know the equation for base current IB is,

We know the values,

Now we substitute these values in the above equation,

The base current of NPN transistor is 46.5uA. 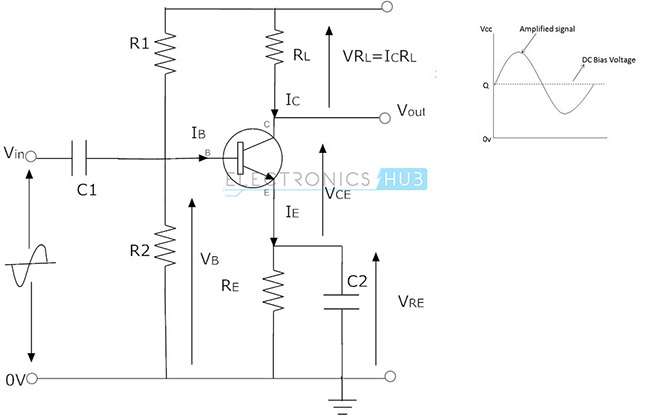 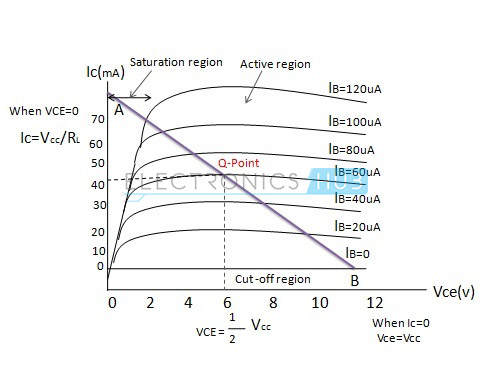 The straight line indicates the ‘Dynamic load line’ which is connecting the points A (where VCE = 0) and B (where IC = 0). The region along this load line represents the ‘active region’ of the transistor.

The common emitter configuration characteristics curves are used to calculate the collector current when the collector voltage and base current is given. The load line (red line) is used to determine the Q-point in the graph. The slope of the load line is equal to the reciprocal of the load resistance. i.e.  -1/RL.