How to Install Led Strip Lights

LED strip lights are right now one of the most popular and alluring parts of decorations for most occasions. As LED strips are available in different sizes, colors, and lengths, it is easy to get your hands on the perfect types of the LED strips for your requirement. Also, LED strip lights to create a great lighting and illumination effect if the light is reflected from a flat surface which makes it a perfect choice for decorative application.

Handling LED strip lights are very easy and it can be performed without needing any professional help. Today, we will be going through the complete procedure of installing new LED strip lights. We will also include some additional information like splitting a single LED strip, Merging multiple LED strips, and using an RGB controller for the LED lights to make it a helpful guide for everyone.

If you purchased only an LED strip reel, some changes have not arrived with proper wiring in the box and you have to do it yourself. With some basic wiring and a compatible driver, you can get this done with ease. Follow the steps provided below to power your LED strip lights. 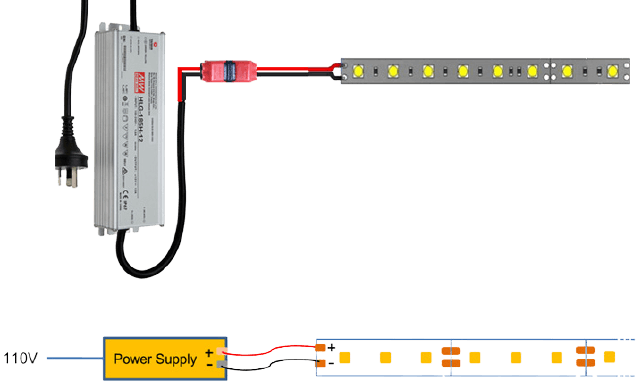 In most cases, you will need a long strip of LED lights to cover a larger area. If you want to cover the periphery of a wall or a large desk, you might not find a single strip of LED that is long enough to cover it properly. In such situations, you will have to connect multiple LED strips. If you wish to connect them to a single power source, here’s how to do it. 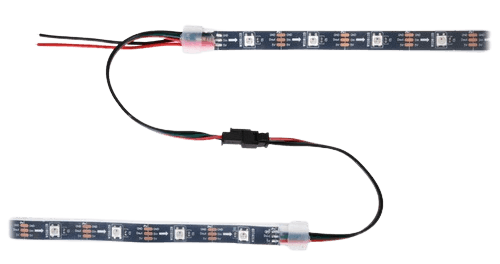 How To Install LED Strip Lights?

LED strip lights are very compact and linear in design as compared to other lighting equipment. This makes LED strip lights the most versatile option when it comes to installation. You can easily install an LED strip light over any flat surface and without any directional constraints.

The LED strip lights are also lightweight. This allows you to stick the LED light strip to any surface without worrying about it falling off eventually. You can install LED light strips behind a TV, under the cavity of drop-down ceilings, or below the furniture placed over the kitchen table in your kitchen.

Most LED strip lights come with pre-applied adhesive on the back which is covered by a protective film. Simply pull the top film away from the strip and you will be able to stick the LED strip lights directly. Alternatively, you can use 3M double-sided tape to ensure a firm grip on the rear side of the LED light strip. However, you should not cover the front portion of the LED strip light with tape as it can ruin the lighting effect by covering several LED lights present on the strip.

Is It Possible To Break LED Strip Lights?

If you have purchased a significantly longer LED light strip compared to your requirement and could not manage to fit the whole strip, you will have to cut it to a certain length. Cutting an LED strip light is very easy. Hence, it must be done carefully so that you don’t accidentally damage the LEDs on the strip. 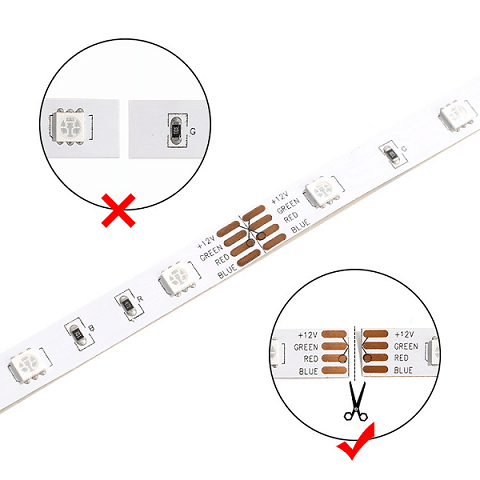 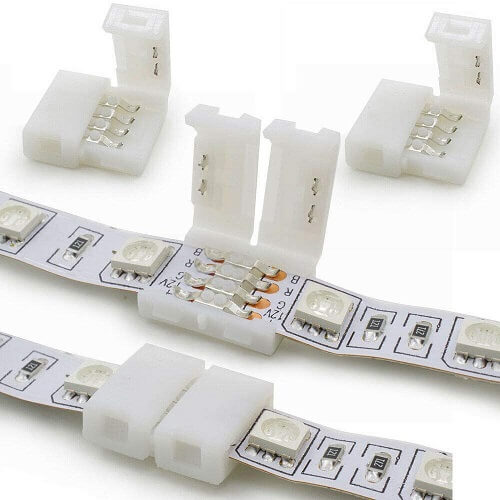 If you do not wish to get a solderless connector, you will need to manually solder the connections between the LED strips. This process must be performed with extreme care and precision as wrong soldering can damage the LED strip.

LED strip lights surely look very attractive and alluring once it is properly installed. But, you have to follow a somewhat tedious procedure to install the LED light strips correctly. The process is a bit more complicated if you have opted for RGB LED strips instead of a single color option. Fortunately, there are many additional components available that will save you the trouble of manual work while installing these LED lights.

Today, we have looked at all of the necessary steps that need to be taken while installing LED strip lights. If you follow our guide carefully, we can assure you that you can install these lights easily without needing any additional help. Also, you can reach us via the comment section if you have trouble regarding the installation of LED strip lights.