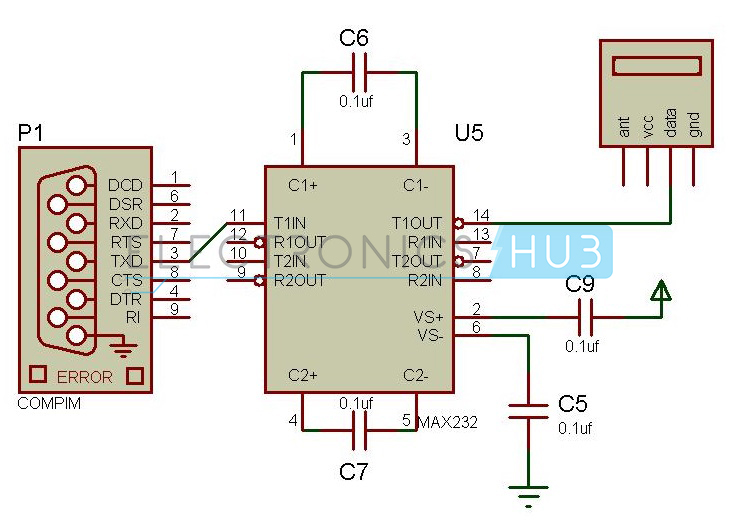 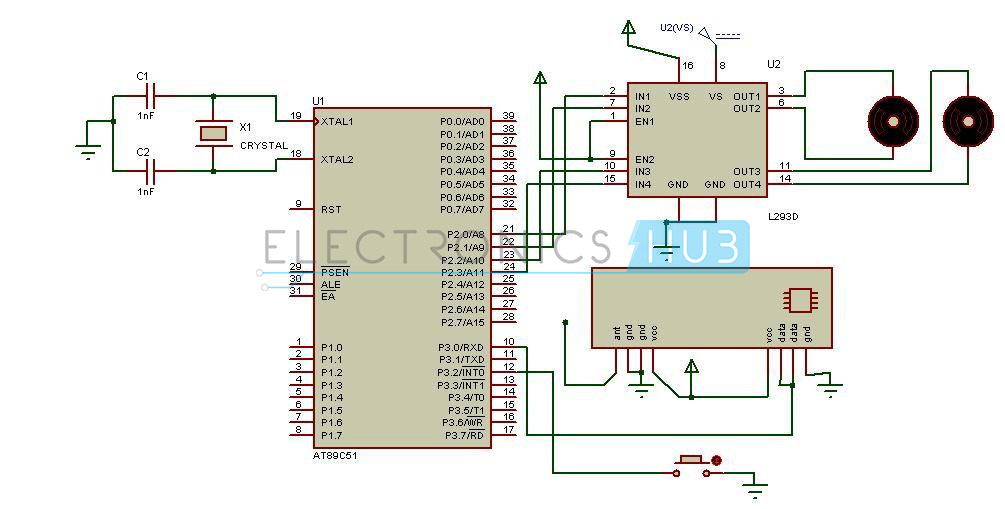 The circuit can be divided into two sections 1) Transmitter Section, 2) Receiver Section.

The transmitter section consists of PC, RF transmitter, MAX232IC, DB9 connector. The commands for operating the robots are transmitted using Personal computer. PC transmits the data to the RF transmitter through max232.

Radio frequency is the wireless technology used here to transmit the data .Several carrier frequencies were used in available modules such as  433.92 MHZ,315MHZ ,868MHZ,915MHZ,2400MHZ .Here the RF modules uses a frequency of  433 MHZ. The DATA pin of the RF transmitter is connected to the T1out of the MAX232.A Vcc of 5v is applied to the RF transmitter.

PIR sensor plays a main role in the circuit. This is used to detect the human beings. The PIR sensor is nothing but Passive Infra Red sensor. These sensors work on the principle that they every human being emits infra red radiations of very low wave length. Thus this sensor senses these radiations and outputs a logic high value. This sensor can sense the human within the range of 20feet. They have an operating voltage of 2.2-5V. PIR sensor is connected to the Port1 of the micro controller.

L293D is a motor drive IC. This IC is required to drive the motor and also eliminates back EMF generated. This IC internally has H-bridge circuit. This has 16 pins out of which four input pins are used to drive two motors. Enables are used to enable these input pins. A supply voltage of 5v is applied at the 16th pin to operate the IC.8th pin is applied with a voltage of 12v required to drive the motors. The L293D IC can drive voltages up to 36v.That is 8th pin can be applied with a voltage ranging from 2.4v to 36v.

Following are the main applications of this Human Detection Robot.

If you are interested to get code, kindly take some time and answer following questions in the comment section, so that we will send you the code.