Flip flops will find their use in many of the fields in digital electronics. Flip flops are the main components of sequential circuits. Particularly, edge triggered flip flops are very resourceful devices that can be used in wide range of applications like storing of binary data, counter, transferring binary data from one location to other etc. Some of the most common applications of flip – flops are

All these applications make use of the flip – flop’s clocked operation. Almost all of them come under the category of sequential circuits.

Counters are widely used in digital electronics and digital systems. They are used to count the number of events occurred in a specific interval of time. Mostly, a counter is used for counting the number of pulses entering at the input of a circuit in a specific time period.

In the terminology of digital electronics, a Counter is a sequential circuit that produces specific count sequence. It is an electronic device which is used to count the clock signals. Counters will have memory since they have to remember the past states of digital circuit and hence they consist of flip-flops in their structure.

Counters are classified into two types.

Here, the clock input is only connected for the first stage. The second stage is triggered by the output of the first stage because of propagation delay of flip flop. The transition of input clock pulse and Q1 output will never occur simultaneously. This is known as ‘Asynchronous operation of counters’. The output of the counter will toggle for the positive edge of the clock pulse because both the inputs are tied to HIGH (logic 1).

A ripple down counter can also be created by connecting the input of next flip-flop to the complimented output (Q’1). It will count from maximum to zero i.e. it acts as a down counter.

One more example of a counter is explained below.

Modulo – n counter resets after a specified number is reached (after ‘n’). The number at which the reset should take place is given by NAND gate. Normal ripple counters are modified to act as modulo – n counters by using NAND gates. When the output of NAND gate is low, the flip flops will reset so does the counter output.

The logic diagram of a modulo – 5 counter is shown below. 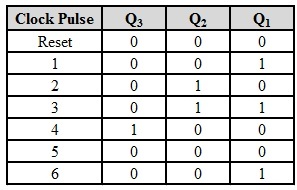 In this counter, both the flip flops are connected to the same clock pulse. The output of the first flip flop acts as the input of next flip flop. 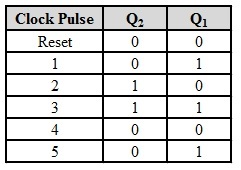 There are many more types of counters we use, like

Flip flops can store a single bit of data i.e. 1 or 0. Registers are used to store multiple bits of data. So flip flops are used to design Registers. According to digital electronics, a Register is a device which is used to store the information. As a single flip flop is allowed for 1 – bit storage, n flip flops are connected in an order to store n bits of data. For example, if a computer is to store 16 bit data, then it needs a set of 16 flip flops. The input and outputs of a register may be serial or parallel based on the requirement. The series of data bits are stored by registers is called “Byte” or “Word”.

Shift registers are of several types, they are

The process of dividing or reducing the output frequency to half of its input signal frequency is called “Frequency division”.

This means if we process an input signal of frequency 160k Hz, then the frequency divider circuit will provide the output of 80k Hz.

“Data transfer” is the process of transferring the data from one register to another register.

In general, the shift registers perform this type of operations. Data can be transferred by using flip-flops, in two ways. They are