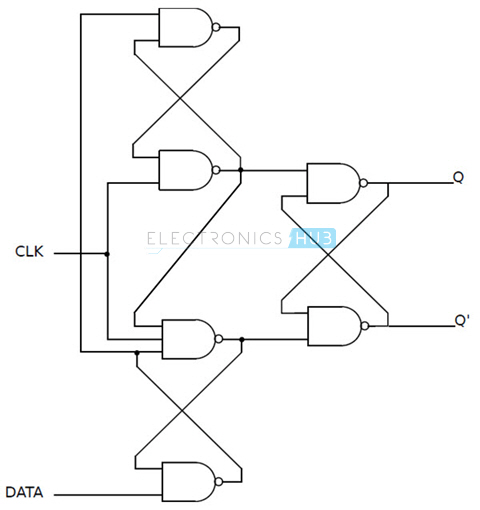 The operation can be explained as follows, when clock signal is low, the outputs of input stage are at high logic irrespective of the value on the data input. Hence, the previous data it stored. When clock is going through a positive transition ( low to high ) , the outputs of the input stage are responsible for set or reset operation of the final output and are dependent on data signal. If the data input is high, the output of the upper latch becomes low and thus sets the latch output to 1 and if the data input is low, the output of the lower latch becomes low which resets the output to 0. If the clock is continuously high for multiple data signals, only the first data input is considered while the remaining data inputs are ignored by forcing output latch to its previous state , as the low input is active as long as clock signal is high. Therefore, the outer latch stores data only when clock is at low logic . The main role of the triggered D flip flop is to hold the output till the clock pulse changes from low to high. The timing diagram of edge triggered D flip – flop is shown below. 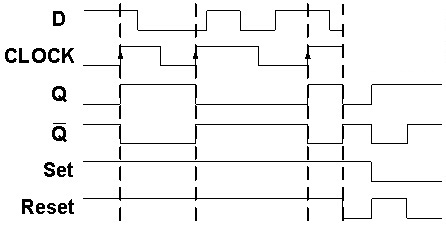 Master slave D flip flop can be designed by the series connection of two gated D latches and connecting an inverted enable input either to of the two latches. Only the change in Master latch will bring change in Slave latch. So these are called Master Slave flip flops. The total circuit of master slave flip flop is triggered either on the rising edge of the clock signal or on falling edge of clock signal depending on the design.
The symbolic representation of a master slave D flip flop that responds to the clock at its falling edge as shown below.

The timing diagram of master slave D flip flop is shown below. 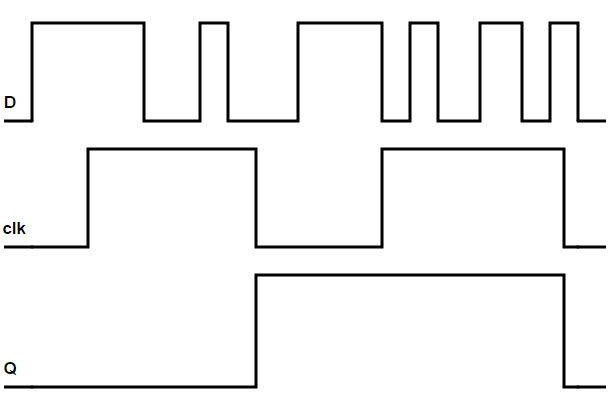 In digital circuits the data is normally stored as a group of bits, represented in numbers and codes. So it is easy to take data on parallel lines and store the data simultaneously in a group of flip flops, arranged in a particular order.. Registers are the basic multi – bit data devices. They are formed by connecting number of D flip – flops such that multiple bits of data can be stored.

Each D flip – flop is connected with a respective data input. Clock input applied is same to all the flip – flops so that all of them will store the data simultaneously from their respective D inputs when a positive edge triggered clock signal is applied.

Shift registers are used in serial to parallel and parallel to serial data conversion. They are also used as pulse extenders and delay circuits.

It can be explained by using the output compared with the clock signal.