Waves are omnipresent in nature that transfers the energy or information from source to destination. The wave is a function of both space and time. An exotic kind of wave is electromagnetic wave which existence is stated by the professor Heinrich Hertz but earlier Maxwell himself predicted the existence of electromagnetic waves.

These waves can travel through a vacuum or no medium. These are different from mechanical waves like sound waves which can travel or transport their energy through a medium of material.

The basic understanding of the electromagnetic wave propagation in medium is provided by the basic concept of uniform plane wave. The uniform plane wave is a fundamental concept in electro magnetics and it is the simplest solution to the Maxwell’s equation for time varying fields in an unbound, homogeneous medium.

Although such medium as unbound, homogeneous does not exists in practice, the fundamental concept of uniform plane wave is very useful for the knowledge of electromagnetic waves. Also, uniform plane wave solution is quite useful and adequate in many problems practically.

In some cases where the media have physical dimensions much larger than the wavelength, then the solution closely approximates the uniform wave solution.

Consider a homogeneous, isotropic, unbounded medium without consisting of any electric or magnetic source. In such case, the medium permeability µ and permittivity є are constant over the entire medium. Since the medium is of source free and hence there are no free charges in the medium. The Maxwell’s equations are given as

The permeability µ and permittivity є are constant as a function of time and space due the homogeneous and non-time varying medium. Thus the Maxwell’s equations become,

Taking the curl of equation 3 and 4, we get

Using the vector identity ∇ × ∇ × A = ∇ (∇. A) − ∇2 A, where A is the any arbitrary vector, then the above equations can be written as

This is the wave equation for the electric field E ̅ for a medium. And similarly

This is the wave equation for the magnetic field for a medium.

The above 5 and 6 equations are the wave equations and their solutions represent the wave phenomenon in three dimensional space. Finally, we conclude that for the existence of time varying fields in a homogeneous, unbounded medium, they have to exist in the form of a wave.

In addition, there must exist both electric and magnetic fields together. That’s how this phenomenon is called as an electromagnetic wave.

According to the results in physics,

Substituting in the above equation we get

Electromagnetic waves in a medium are characterized by the electrical parameters like permeability, permittivity and conductivity. EM waves are associated with both electrical and magnetic fields which are perpendicular to each other as well as perpendicular to the direction of propagation.

And the phase of these fields is independent of x and y axes thereby no phase variation exist over the planar surfaces orthogonal to the direction of the propagation.

The waves that are uniform in magnitude and direction in the planes of a stated orientation are called as plane waves. The magnitudes of EM wave fields (electric and magnetic field) are constant in the xy – plane and the surface of constant phase forms a plane parallel to the xy-plane and hence these waves are termed as plane waves.

According to the Maxwell’s curl equations, the oscillating electrical field produces a magnetic flux which further oscillates in order to create the electric field. This interaction between these two fields cause to store the energy, thereby it carries the power.

The important properties of the waves are amplitude, phase or frequency, which allows the waves to carry the information from source to destination. 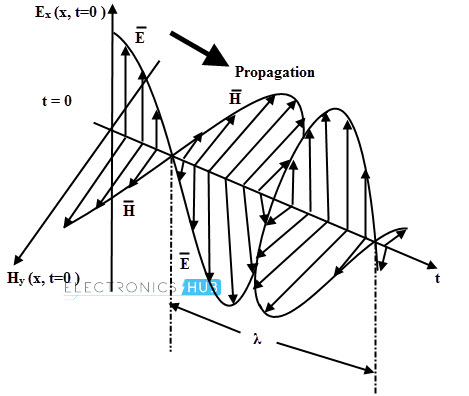 In particular, the uniform plane waves are EM waves which electric field is the function of x and time t and independent of y and z axes.

If an electric field of an EM wave is parallel to the x- axis, then the wave is said to be linearly x- polarized. A straight wire antenna parallel to x-axis could generate this type of polarized wave. In a similar way, y-polarized waves are generated and defined along the y-axis.

Therefore, the direction of the resultant electric field E ̅ depends on the relative magnitudes of E ̅x and E ̅y. Thus the angle made by the E ̅ with x-axis is given by

Where Ey and Ex are the magnitudes of the E ̅y and E ̅x respectively.

With respect to time, this angle is constant and hence the wave is said to be linearly polarized. Therefore, the polarization of the uniform plane propagating in a z- direction is linear when E ̅x and E ̅y are in phase either with unequal or equal magnitudes. 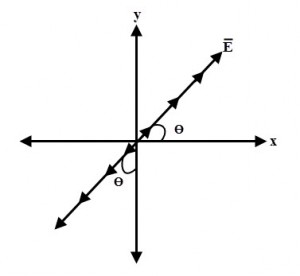 If the two planes E ̅y and E ̅x (which are orthogonally polarized) are of equal in amplitude but has 90 degrees phase difference between them, then the resulting wave is circularly polarized. In such case at any instant of time, if the amplitude of the any one component is maximum, then other component amplitude becomes zero due to the phase difference.

If the resultant electric field E ̅ is projected on a plane perpendicular to the direction of propagation, then the locus of all such points is a circle with the center on the z- axis as shown in figure.

During the one wavelength span, the field vector E ̅ rotate by 360 degrees or in other words, completes one cycle of rotation and hence such waves are said to be circularly polarized. 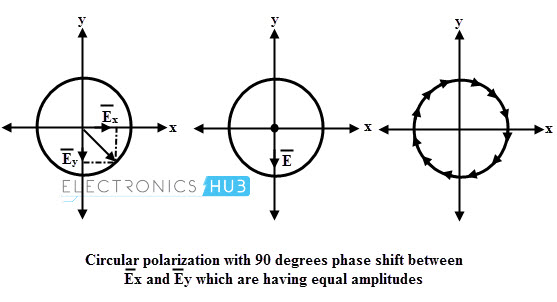 For a LHCP wave the vector field rotates in anticlockwise direction. Therefore, the polarization of a uniform plane wave is circular if the amplitudes of two components of electric field vector are equal and having a phase difference of 90 degrees between them.

In most of the cases, the components of the wave have different amplitudes and are at different phase angles other than 90 degrees. This results the elliptical polarization. Consider that electric field has both components E ̅x and E ̅y which are not equal in amplitude and are not in phase.

As the wave propagates, the maximum and minimum amplitude values of E ̅x and E ̅y not simultaneous and are occurring at different instants of the time. Thus the direction of resultant field vector varies with time.

If the locus of the end points of the field vector E ̅ traced then one can observe that the E ̅ moves elliptically on the plane. Hence such wave is called as elliptically polarized. 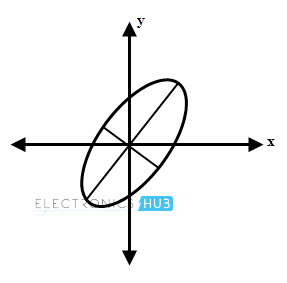 Suppose if we pass through a tunnel or under the bridge, our radio ceases to receive the signals and also compared to the day, during the night time, we will experience a better reception of radio signals. Thus the waves are affected by the materials or environmental conditions.

So it is necessary to know the propagation of electromagnetic waves in order to choose the appropriate values of frequency, power, type of wave and other parameters needed for the design of applications include transmission lines, antennas, waveguides, etc.

The above two equations are called as wave equation in a waveform. In the above equations the terms inside the bracket is same and properties of the medium through which the wave is propagating is represented by this term. This term is equal to the square of a propagation constant ɣ. Then the wave equations becomes

In terms of the properties of the medium, the propagation constant is given as

In general, the wave gets attenuated when it travels through a medium, hence the amplitude of the wave get attenuated. This is represented by the real part of the propagation constant and it is given by

Similarly, the phase change occurs in a wave when it propagates through a medium. This phase change is represented as imaginary part of the propagation constant and is given as

Therefore the propagation constant is purely imaginary for free space.

By substituting σ = 0, є = єo єr and µ = µo µr in the above equation for a perfect or lossless dielectric, we get

A lossy dielectric is a poor insulator, in which free charges conducts to some extent. It is an imperfect conductor and imperfect dielectric (which is a partial conducting medium) with σ ≠ 0.

The propagation constant is given as

The attenuation constant α indicates the certain loss of the wave signal in the medium and hence this type of medium is called as lossy dielectric.

And also due to σ ≠ 0, the intrinsic impedance becomes a complex quantity and is given as

The intrinsic impedance can be expressed as

And the angle Өn is given as

This angle depends on the frequency of the signal as well as properties of the lossy dielectric medium. Then, w becomes very small for a low frequency signal. Thus, the phase angle is given as

So the range of Өn of a lossy dielectric for complete frequency range is 0 Өn (π/4).

In case of power transmission at low frequencies, electrical parameters like resistance, capacitance, inductance, etc are enough to characterize the complete electric circuit. In such circuit analysis, the physical size of electrical components is not considered and simple Kirchoff’s laws are enough to analyze the circuit.

However, if the frequency is increased, the size of the physical parameters must be considered and also space starts playing a role in the analysis of the circuit.

In such transmission the voltages and currents are exists in the form of waves. This type of approach for analysing the circuit with inclusion of space consideration is called as a transmission line approach.

An antenna is one of most important devices in the communication system, although it appears as a passive looking device. It can efficiently launch and receive electromagnetic waves. Several types of antennas have been in use for serving different applications.

With the advancements in the mobile communications, compact, multi-frequency and efficient antennas are developed during recent years. By using the power ranging from a few watts to Mega watts, the communication is established by these antennas.

The understanding of radio environment requires the knowledge of electromagnetic wave propagation. In a cellular system, different frequency reuse schemes are employed depends on the signal strength variation as a function of distance. One of the major important aspect of the mobile communication is fading.

Thus, for correctly predicting the behavior of the fading, signal processing algorithms need the knowledge of the radio environment. Hence the electromagnetic waves and its analysis plays key role in mobile communication systems.

A high speed and efficient long haul communication use a variety of fiber optic devices which are developed by employing the complex phenomena of electromagnetic waves. This communication is the modern form of guided wave communication.

For the investigation light propagation in the optical fibers electromagnetic theory is used. Due to the direct consequence of the direct consequence of the wave nature of light results a modal propagation inside an optical fiber. Also for analysing the photo and laser detectors, the electromagnetic wave theory is very important.

In general, an electric circuit tends to give electromagnetic radiation, especially when they are switching heavy currents. This radiation may interfere with other parts or elements in the network, thereby affect the overall circuit performance.

Example case is SMPS and high speed digital circuits produce a considerable electromagnetic interference. Mostly shielding circuits are used for protecting the circuits from EMI. Thus the proper design of such EMI shields requires the knowledge of electromagnetic waves.

The radio astronomy is a combination of physics and electronics engineering. It is one of the major important areas where understanding of the electromagnetic waves is necessary. In astronomy, the observations of the sky are carried out at radio frequencies.

These RF signals are very weak in nature and thus sate of art communication receivers and antennas are used to detect such signals. Therefore, in radio astronomy all aspects of electromagnetic waves are employed.