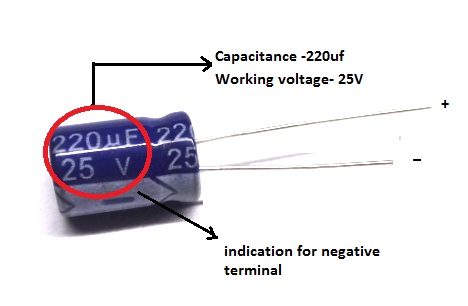 The nominal capacitance value may change with working temperatures and with the circuit frequency. These nominal values are as low as one pico-farad (1pF) for smaller ceramic capacitors and as high as one farad (1F) for electrolytic capacitors. All capacitors have a tolerance rating that ranges from -20% to +80%.

Tolerance is the permissible relative deviation of the capacitance from the rated value, which is expressed in per cent. Like resistors, the tolerance value for capacitor also exists in either plus or minus values. This tolerance value is generally measured in either pico-farads (+/-pF) for low value capacitors which are less than 100pF or in percentages (+/-%) for higher value capacitors, which are greater than 100pF.

The tolerance value of a capacitor is measured at a temperature of +20°C and it is valid only at the time of its delivery. If a capacitor may be used after a longer period of storage then the tolerance value will increase, but according to the standard specifications, this value will not exceed twice the value which is measured at the time of its delivery. The delivery tolerances usually for wound capacitors are +/-(1%,2.5%,5%,10%,20%). The very general tolerance values variation for capacitors is 5% or 10%, and this is rated as low as +/-1% for plastic capacitors.

All dielectric materials which are used in the capacitors to separate the metal plates of capacitors are not perfect insulators. They allow the small amount of current, such as leakage current to flows through it. This effect is because of the high powerful electric field which is formed by the charge particles on the plates of a capacitor when supply voltage (V) is applied to it.

The leakage current of a capacitor is a small amount of DC current which is in nano-amps (nA). This is because of the flowing of electrons through the dielectric material or around its edges and also by discharging it overtime when the power supply removed.

The leakage current is very low in film or foil type capacitors and it is very high (5-20 uA per uF) in electrolytic (tantalum and aluminium) type capacitors, where their capacitance values are also high.

The capacitance value of a capacitor may change, if air or the surrounding temperature of a capacitor is too cool or too hot. These changes in temperature will cause to affect the actual circuit operation and also damage the other components in that circuit.I think it is not a simple thing to keep the temperatures stable to avoid capacitors from frying.

The oxide layer inside the capacitor may broken by incorrect polarization, this causes to flow of high currents through the device. As a result capacitor damages as mentioned earlier. To prevent incorrect polarization the majority of electrolytic capacitors have arrows or black stripe or band or chevrons on one side of their body to denote their negative (-ve) terminals as shown in the below figure. 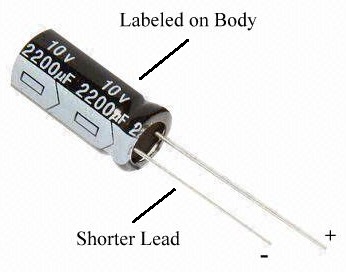 Figure 2.Polarization of the Capacitor

ESR acts like a resistor in series with a capacitor. The ESR of a capacitor is the rating of its quality. We know that theoretically a perfect capacitor is lossless and also have the ESR value zero. Often this resistance (ESR)causes to failures in the capacitor circuits.

The Effects of Equivalent Series Resistance

The equivalent series resistance (ESR) of the output capacitor in the circuit causes to affect the performance of the device. And also the ESR may reduce the supply voltage of a capacitor. The ESR is quite opposite to the insulation resistance of a capacitor which is presented as pure resistance in parallel with the capacitor in some type of capacitors. An ideal capacitor has only its capacitance and ESR value is very less (less than 0.1Ω).

Generally the ESR values are less for polymer capacitors than electrolytic (wet) capacitors of same value. Thus the polymer capacitors can handle the higher ripple currents. A capacitor can be used as a filter which having a very low ESR ratings. Capacitors have the ability of storing the electrical charge even though the charging current is not flowing through it. The capacitors used in the televisions, photo flashes and capacitor banks are generally of electrolytic type capacitors. According to the thumb rule the leads of large value capacitors are need to never touch after power supply was removed.