Android vs Apple Phones: Which Does the World Love Most?

“I’m going to destroy Android, because it’s a stolen product. I’m willing to go thermonuclear war on this.” — Steve Jobs

As upgrades have come and gone, Android and iPhone users have likewise gone to war. Android users think iPhones are overpriced toys for basic people. Apple users think Androids are over complicated bricks with a tendency to fail.

Each tribe has problems with their own weapon of choice, too. Unwieldy dongles. Dubious happenings between the app store and the device. And nobody knows exactly where the iCloud is.

So which phone gets the most hate from country to country? We used an academic language analysis tool called SentiStrength to analyze 347,856 brand-related tweets from around the world for positive or negative feelings. SentiStrength gives short texts a positive (1 to 5) and negative (-1 to -5) score. We considered a tweet positive if the positive sentiment scored higher than the negative sentiment and vice versa.

The World According to Android and Iphone Lovers

We all know that the founder of Apple preferred Apple (duh), but does the rest of the world agree? 74 of the 142 countries we surveyed prefer Android and 65 favor Apple, which, in case maths is not your forte, means that the answer is no, it doesn’t.

Both Android and Apple originated in California, but the former narrowly wins America — 30.16% of the tweets about Android were positive compared with 29.03% positive tweets about Apple. Android also wins the UK, China, Russia and large parts of every continent across the globe. Three countries can’t make up their minds (Belarus, Fiji and Peru).

Where does your country stand? Green countries represent Android loving countries, and the Apple countries are grey.

Android and Apple have a major cultural/sales turf war on their home turf – and Android is in the lead on Twitter. Fully 32 states are tweeting more love for Android phones. However, Android may have New York, but Apple has California – the state where both companies are based.

And it’s political: “Do you use an iPhone? Watch Netflix? Listen to Spotify? Then you love capitalism and can’t stand big government,” states one user. “Do you use an iPhone (California)? Watch Netflix (California)? Listen to Spotify (Sweden)? Then you love left-leaning governments and can’t stand conservatives,” responds another.

Poland is Home to the Biggest Android Haters

This map shows the percentage of negative tweets about Android from every country. The darker the shade of green, the more shade local tweeters were throwing at Android.

Poland is the biggest Android hater, with more than 34.4% of Android-related tweets favoring negative sentiments. But on the Apple v. Android battle, one user complains, “I do not understand these wars :d For me, all encounters with Android are pain and p***ing off, but I don’t spam this at every possible opportunity, I just don’t use :D.”

Apple products really get Latvians down. Over 35% of Latvian tweets about the brand have a negative flavor, making Latvians the biggest Apple-haters in the world.

“You can use iOS15 with iPhone 6S (if you somehow are able to make enough free space on it to get system update, LOL),” comments one Latvian app developer – highlighting the fact that the iPhone’s resistance to additional storage makes it a no-no for many keen photographers and music collectors.

Android takes North America. Eight of 21 countries on the continent hate Apple more than they hate Android. And Android has big boys like the US and Canada – although Mexico prefers Apple. “Thanks to @Apple for created autocorrect in the IPhone,” says one Mexican user, “that way my parents don’t know if I’m high.”

“iOS 14 is eerily similar to Android,” notes another user, echoing Steve Jobs but without the declaration of war. In fact, SentiStrength judges this tweet to be neutral. Another takes the fight to the users: “Android owners are the most insecure people on this planet,” says PaydrO.

Android vs Apple Phones in Europe

Europeans hate Android more than Apple. The iPhone gets the most Twitter positivity in 20 of 39 countries, while Belarus likes/hates both brands equally. Ireland prefers the iPhone, with one disgruntled Android user declaring, “This is my last month with an android. I have some fond memories but you’ve disgraced me 1 too many times.”

But nearby UK is in the anti-Apple camp, even among iPhone owners: “will I install the new iOS 15 beta on my iPhone?” asks one user. “yes. will i regret it? yes.” (Positive strength 1, negative strength -2).

The battle is a close thing in South America. Five countries prefer Android, Peru loves/hates both brands equally, and four countries are anti-Android. In Peru, 25% of Android-related tweets were positive, and the same for Apple tweets.

It’s not just Apple users knocking Android, though: “Google Calendar on Android is being really aggressive in trying to push me to use Google Meet instead of Zoom,” as one Brazilian Android user grumbles. 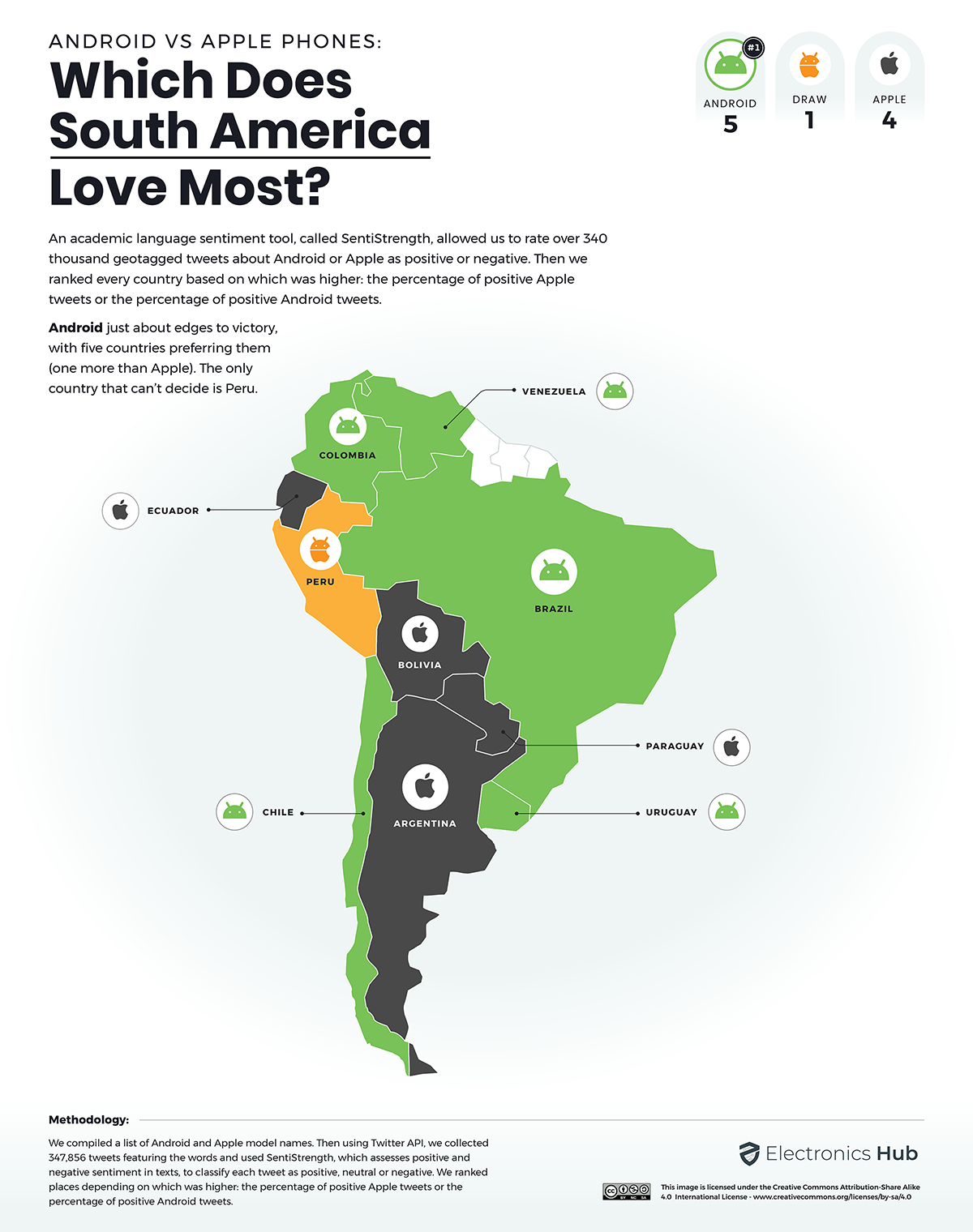 Android vs Apple Phones in Africa

Of the 32 African countries with available data, 17 prefer Android, and 15 prefer Apple. But the picture is muddied by a new contestant. Sales of Huawei phones are rising across South Africa, a country that we found to prefer Android. Huawei traditionally uses the Android operating system but is to unleash its own OS, called Harmony.

Of course, iPhone will always have its own selling point: “In America iphone is just phone but here in africa it’s a sign of wealth,pro camera shoot, drip,it’s a huge flex… ??”

Android vs Apple Phones in the Middle East & Central Asia

Eight out of 14 countries in this region hate Apple the most. But it’s complicated. One pertinent tweet shared some data viz, asking “Why does #Asian #İstanbul use more #iPhones and #European İstanbul more Android phones?” Is this tweet positive or negative? TensiStrength says ?.

Android vs Apple Phones in the Rest of Asia and Oceania

There are 26 countries with data in this region – 13 prefer Android, and 12 prefer Apple. Fiji couldn’t care less, offering just nine tweets about each brand, with 22% positivity for both Android and Apple.

Australians prefer iPhones. In fact, Australians need iPhones: “i just need an iphone and that would literally fix 99% of my problems lmao,” laughs @smolilmera from Perth. Just over the water, New Zealanders prefer Android. But with typical reasonableness, local pundits say it doesn’t matter which one you get, as long as you commit to a long and meaningful relationship with your chosen brand.

Figures recently showed that while Android users make better partners in a relationship, iPhone users are more likely to get a date in the first place.

Our own study shows the world remains hugely divided by the Apple/Android debate. Maybe we’d all be a lot happier if we could concentrate on what we have in common. (Pretty much everything, if you agree the phones are getting more and more alike with every generation ? ?.)

If you want to see the full results of ou research then explore the table below:

The academic SentiStrength tool estimates the strength of positive and negative sentiment in short texts, allowing us to use it to classify every tweet as negative, positive or neutral.