The AC circuit behavior with inductor is entirely different from the DC circuit. In this the current flowing through the coil depends not only on the inductance but also on frequency of the alternating source. Let us discuss the behavior of AC circuit with inductive loads in brief.

AC Applied Across a Pure Inductor

Substituting the emf expression, we get

By applying integration on both sides, we get

When (sin ωt – π/2) is unity, the current flowing through the circuit will be maximum. So

Then the current equation becomes,

From the above current and voltage expressions, it is clear that the current lags the voltage by 900. Therefore, in pure inductive circuit current is in quadrature with the voltage as shown in waveforms of the above figure.

Thus, the voltage across an inductor leads the current through that inductor by ¼ (quarter) cycle. The phasor diagram of a pure inductive AC circuit is given below. 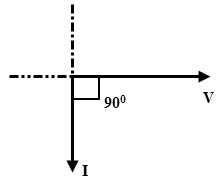 From the above derivation, the maximum current equation is given as

This ratio of voltage to current is the opposition offered by the inductive circuit to the current flow. This wL quantity is termed as inductive reactance and it is denoted as XL, measured in Ohms.

The inductive reactance of the AC circuit can be represented as

Where XL is the inductive reactance in Ohm’s

f is the frequency of the supply voltage

L is the inductance of the coil in Henry

The above equation tells that when the frequency of the input supply increases, the rate at which current changes also gets varied. Hence, the induced emf (or reacting voltage) across the inductor will be increased.

As a result, the net current flowing through the inductor will be reduced. It is to be concluded that reactance of the inductor varies linearly with frequency of the supply as shown in figure. 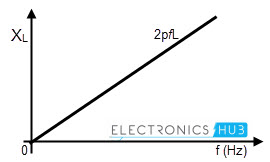 The power in an AC circuit is the product of instantaneous voltage and current. This can be given as

Taking integration over a cycle we get,

The below figure shows the power curve of the inductive AC circuit in which positive power is equal to the negative power, so the resultant power over a cycle is zero. This clearly explains that no power is consumed by the pure inductance. 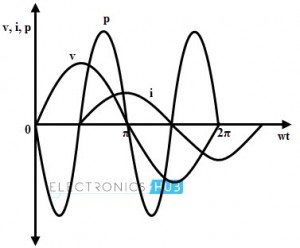 As we know that there is no pure inductance physical circuit because every coil has some winding resistance along with inductance. In such circuit, resistance is considered as series element to the inductor.

Consider the below figure in which a pure resistance is connected in series with pure inductance. This series combination is connected across an AC supply of voltage v = Vm sin ωt. 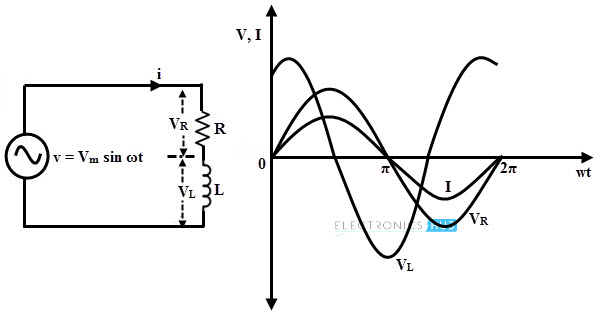 Let I be the current flowing through the circuit, VL and VR  are the voltage drops across inductance and resistance respectively.

Voltage across the resistor, VR = IR

From the above phasor,

The opposition offered by the AC circuit to the flow of sinusoidal current is called as impedance. It can also be defined as the ratio of sinusoidal voltage to the current. It is denoted by the letter Z and is measured in Ohms.

From the RL series phasor diagram, 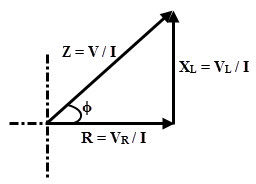 If all sides of the triangle obtained in XL series circuit is divided by current, we get impedance triangle as shown in figure. From this triangle R, XL and Z components can be expressed as