In this project, we have designed a simple 230V LED Driver circuit, which can drive LED directly from the mains supply.

An LED is a special type of diode used as an Optoelectronic device. Like a PN junction diode, it conducts when forward biased. However, a special feature of this device is its ability to emit energy in the visible band of the electromagnetic spectrum i.e. visible light.

A major concern to drive an LED is to provide an almost constant current input. Often, an LED is driven using batteries or control devices like microcontrollers. However, these have their own disadvantages, for example – low battery life etc.

Keeping in mind all the factors, here we designed a simple circuit driving an LED from 230V AC. This is accomplished using a capacitor based power supply.  This is a low cost and efficient circuit and can be used at homes. 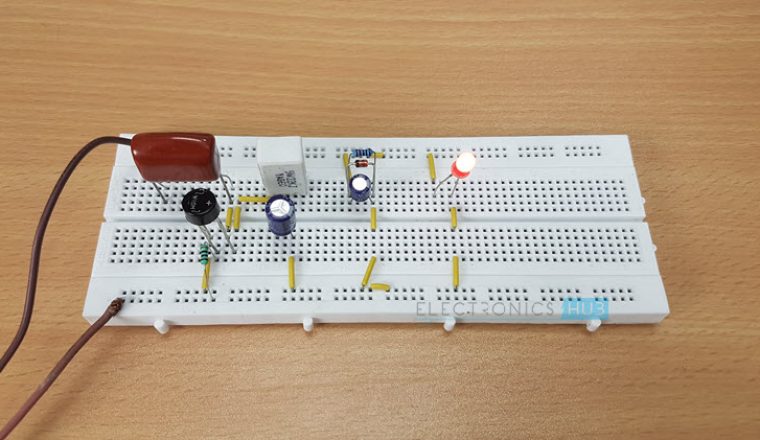 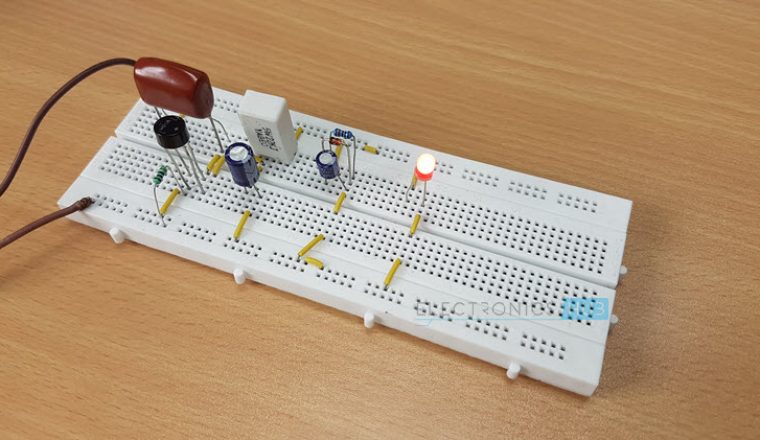 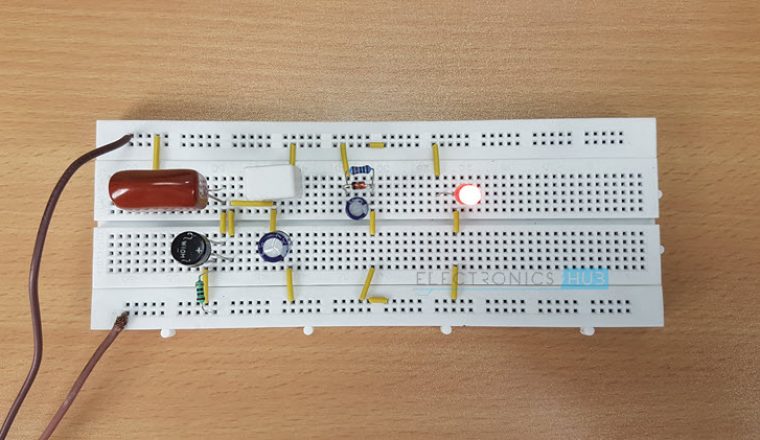 The basic principle behind the 230V LED Driver circuit is transformer less power supply. The main component is the X-rated AC capacitor, which can reduce the supply current to a suitable amount. These capacitors are connected line to line and are designed for high voltage AC circuits.

The X – Rated Capacitor reduces only the current and the AC voltage can rectified and regulated in the later parts of the circuit. The high voltage and low current AC is rectified in to high voltage DC using a bridge rectifier. This high voltage DC is further rectified using a Zener diode to a low voltage DC.

Finally, the low voltage and low current DC is given to an LED.

How to Design a 230V LED Driver Circuit?

First, a 2.2µF / 400V X – Rated Capacitor is connected in line with the mains supply. It is important to pick a capacitor with voltage rating greater than the supply voltage. In our case, the supply voltage is 230V AC. Hence, we used a 400V rated capacitor.

The next part of the circuit is a full wave Bridge Rectifier. We have used a single chip rectifier W10M. It is capable of handling currents up to 1.5 Amperes. The output of the Bridge Rectifier is filtered using 4.7µF / 400V Capacitor.

For regulating the DC output of the Bridge Rectifier, we are using a Zener Diode. A 4.7V Zener Diode (1N4732A) is used for this purpose. Before the Zener Diode, we have connected a series resistor of 22KΩ (5W) for limiting the current.

The regulated DC is given to the LED after filtering it out using 47µF / 25V Capacitor.

The formula for calculating the Capacitive Reactance is given below.

So, for 2.2µF Capacitor, XC can be calculated as follows.

So, from Ohm’s Law, the current that the capacitor allows is given by I = V/R.

This is the total current that enters the bridge rectifier. Now, output of the Bridge Rectifier is filtered using a Capacitor. It is important to select an appropriated voltage rating for this capacitor.

Hence, you need to use a 400V rated filter capacitor. The Rectified DC voltage is around 305V. This must be brought down to a usable range for lighting up the LED. Hence, the Zener Diode is used in the project.

First, the Series Resistor. This resistor will limit the current flowing through the Zener Diode. The following formula can be used in selecting the series resistor.

Here, VIN is the input voltage to the Zener Diode and is = 305V.

VZ is the Zener Voltage (which is same as the load voltage VL) = 4.7V.

IL is the load current i.e. the current through the LED and is = 5mA.

IZ is the current through the Zener Diode and is = 10mA.

Therefore, the value of the Series Resistor RS can be calculated as follows.

Based on the above calculations, we have chosen the series resistor of 22KΩ Resistance rated at 5W and a 4.7V Zener Diode rated at 1W (actually, a quarter Watt Zener would suffice).

The rectified and regulated voltage with limited current is given to the LED.