Have you ever thought of transmitting audio and video signals? Here is the simple circuit that amplifies and transmits audio, video signals. These are transmitted in very high frequency band (VHF).

Also get an idea about How FM Radio Transmitter Circuit Works? 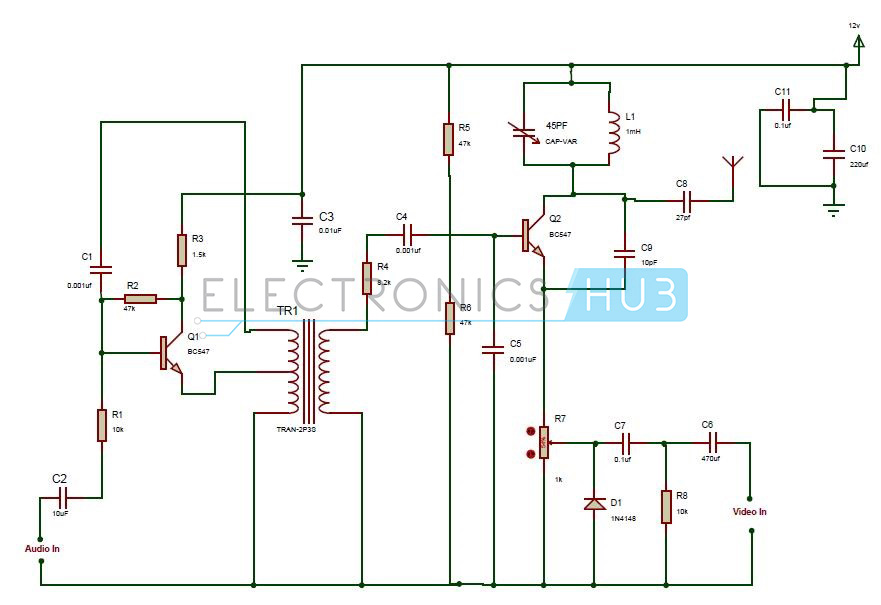 The circuit consists of following components:

The TV transmitter circuit design is explained below.

Radio frequency transformers are used for maximum power transfer. They have two windings Primary and secondary. The voltage is applied at the primary winding and due to mutual inductance some voltage is induced in the secondary winding of the transformer. Hence voltage can be transferred from one circuit to another circuit. Here in this circuit, a transformer with an inbuilt capacitor is used.

Signal diode is a diode which allows the current to flow only in one direction. They pass small currents upto 100mA and process the information in the electrical signals. They are used widely in signal processing. Here signal diode is used for video modulation.

Video input signal is applied to the transistor through the variable resistor of 1kohms. It is fed to the pot through a capacitor of 0.1uf and a signal diode in parallel to it.

The modulated signals are fed to the antenna. Antenna is required to transmit the signal. Antenna takes the electrical signal and converts them into an electromagnetic radiation. This radiation is emitted by the antenna.

How to Operate TV Transmitter Circuit?