Among all the waveforms , sine waves are frequently used because of their ease of representation and some specific advantageous characteristics. The sine or sinusoidal wave is a curve that describes a smooth repetitive oscillation. We can define the sine wave as “The wave form in which the amplitude is always proportional to sine of its displacement angle at every point of time”.

All waves can be made by adding up sine waves. The sine wave has repetitive pattern. The length of this repeating piece of the sine wave is called the wavelength. 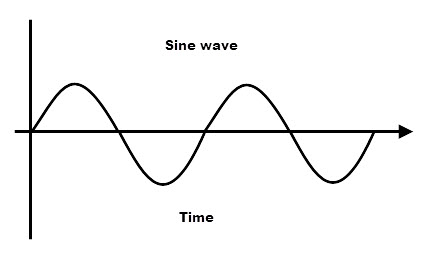 A is the amplitude,

F is the frequency,

There are many methods to generate sine wave .They are listed below.

The basic method for generating sine wave is “ Basic single coil generator” which is already explained in our previous article “AC theory”.

R.P.M. Stands for “Revolution per Minute”. This means ‘The number of revolutions made by a coil’ is called “RPM”. For suppose a shaft of a motor is completing 100 revolutions in a minute, then the speed of the motor is said to be ‘100 RPM’

The number of poles is always an even number.

The relation between the RPM of the coil, the frequency of the produced sine wave and the number of poles is given below.

Generally we say ω = 2πf, but in case  of  rotation takes place because of magnetic poles, we write the angular velocity as

Number of revolutions can be written as,

ω is the angular velocity of the sine wave

N is the number of poles.

F is the frequency of the wave form.

Displacement of a Coil With in a Magnetic Field

ω is the angular velocity of the sine wave

t is the time period of the sine wave.

To understand this easily, we will plot the instantaneous values of sine wave at every 45o. In one complete cycle, we can have 8 values for every 45o of angle.

This is because, no part of the moving coil is affected by magnetic flux lines. The zero EMF induced at the positions A & E. Similarly, at 900 and 2700 of phase, the sine wave will have the maximum amplitude. It occurs at C & G. 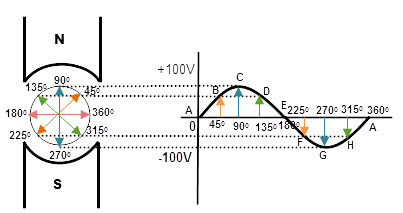 The EMF value of the sine wave with respect to the phase angle of the moving coil is given below.

It is a vector quantity. Units for Angular velocity: RADIANS or degrees

As we already explained above, it is denoted by ω. It is a function of the time period of the sine wave, i.e. the time taken to complete one revolution (T).

If a sine wave is defined as Vm¬ = 150 sin (220t), then find its RMS velocity and frequency and instantaneous velocity of the waveform after a 5 ms of time. 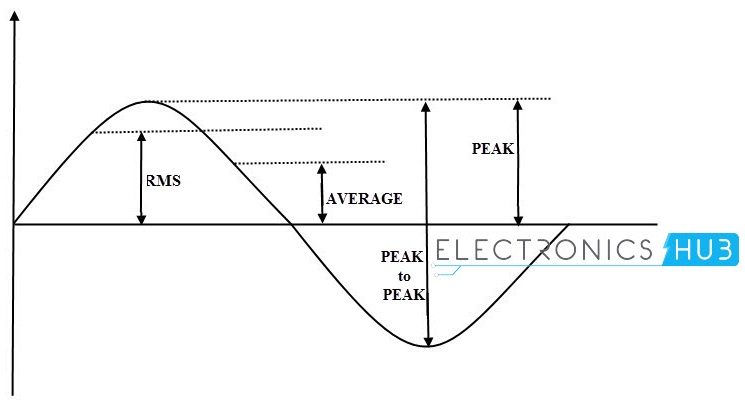 The peak voltage of the maximum voltage is 150 volts and

The RMS velocity of the wave form is given as

The angle of a sine wave is a function of its frequency, as we know the sine wave’s angular velocity, so we can find out the frequency of the waveform. By using the relation between ω and f

The instantaneous value is given by after a time of 5 ms can be calculated by using the below formula.

Phase of the angle at time t = 5 ms are calculated in radians. We can convert the radian values into degree values very simply. The formula for conversion of radians to degrees is