You are here: Home / General / Average Value of an AC Wave

Calculating the magnitude of alternating quantities like current or voltage in AC is not a straight forward job as in DC where the values are constant over time. There are several methods to represent the magnitude of an Alternating waveform. In case of an AC sinusoidal waveform, the magnitudes of voltage and current can be represented by

The values of average voltage and average current of an AC sine wave can be useful in many circuit analysis operations. In fact, rectifier type multi-meters measure the average voltage of the AC and then perform some calculations on that and display the output as RMS value.

Average voltage, as the name indicates, is the average of instantaneous voltages that are chosen at appropriately timed intervals in the half cycle of an AC sinusoidal (or any other periodic) waveform. Average value represents the quotient of the area under AC wave form with respect to time.

The sum of the areas under both half cycles is returned to Zero, as the negative and positive areas cancel each. Hence, the average value is calculated by considering only half the period.

The mean value can be found for both AC and DC circuit analysis and calculations. Average value is represented by VAVG for average voltage and IAVG for average current.

The Concept of Instantaneous Value

Instantaneous value (either voltage or current) of an alternating waveform is the value at any particular instant of time. The voltage of a waveform at a given instant in time is called “Instantaneous voltage”. 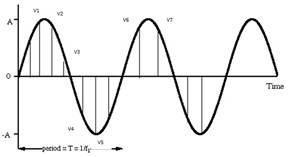 Average Voltage of a Waveform in Graphical Method

This process is similar to the process of finding the RMS voltage. The positive half cycle is equally divided into n number of portions with equal spaces between them. The equally divided portions are called “Mid ordinates” and this quotient value of each portion is called “Instantaneous value”. 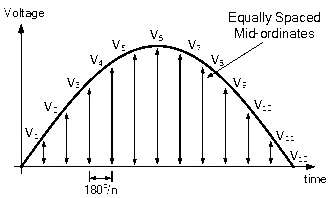 For example, if we have divided the half cycle into 10 equal ordinates, then the average voltage can be calculated as

If we consider an alternating wave representing an AC voltage with the maximum voltage as 340v, then the average voltage can be calculated as follows.

Divide the curve into 10 mid-ordinates and calculate the instantaneous voltages at those points.

Using the above formula, the average voltage can be calculated as

Average Voltage of a Waveform in Analytical Method

This is applicable only to symmetrical waveforms like sinusoidal waves. In non-symmetrical voltages, we should calculate the average of the instantaneous voltages for the complete cycle of the periodic waveform, in order to find the accurate value.

Approximation of the Area

The accuracy of the average value can be increased by considering an infinite (very large) number of small rectangles. The following graph represents the average of the area covered under the curve with small rectangles at equal intervals of the waveform. 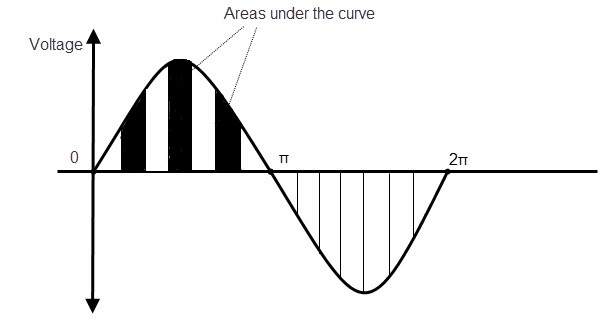 By calculating the average of the area under the curve, we can find the exact value of the average voltage value. The most accurate value will be occurred when the value approaches 2Π.

There are many methods to approximate the value of the area under the curve. They are Trapezoidal rule, mid – ordinate rule, Simpson’s rule, etc. If we consider an AC voltage sine wave, it is represented as V (t) = Vp.cos (ωt). The area under the curve at every instance is mathematically given as

Here, T is the time period of the periodic waveform and the limits of the integration are 0 and Π as we are considering only the half cycle.

Using the above formula, we can calculate the area under the waveform and we get that as

For example, if we have the instantaneous voltage of the alternating wave as V = Vp.sinθ with the time period 2Π then the average voltage of the AC wave form is

The average voltage value of an alternating waveform is given by

So the average value of the AC sinusoidal wave is equal to the multiplication of peak voltage value with 0.637.
As the above discussed example, if we have a sine wave with 340 Volts maximum (peak) voltage, then the average voltage value can be found in analytical method is given below. 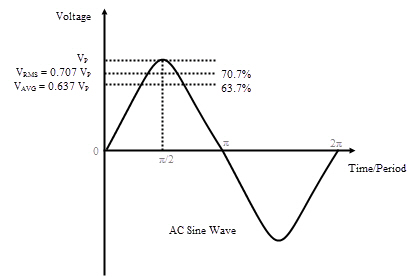 NOTE: Multiplying the peak value with 0.637 is only applicable for sine wave, it doesn’t apply for other waveforms like sawtooth wave and triangle wave.

Rectifier type multi-meters indicate the RMS values (voltage or current) for sinusoidal waves only. The RMS value is calculated by first calculating the Average value and then multiplying by 1.11. If we use this multi-meter for measurement of RMS value of any other Alternating waveforms, the result will be an erroneous RMS value.