In this tutorial, we will learn about an introduction to semiconductors as they are an essential part of Electronics. Before understanding several devices like Semiconductor Diodes, Transistors, etc. it is important to know a little bit about the electrical conductivity, energy gap and basic types of semiconductors.

This part of the tutorial will lay out a key foundation in easily learning the PN Junction, which is next in line.

The three necessary materials that are utilized in electronics are insulators, semiconductors and conductors. These materials are classified in terms of electrical phenomenon. Electrical resistivity conjointly known as electrical resistance is a measure of how efficiently a material refuses the electrical current to flow through it.

Semiconductors have high importance in the manufacture of electronic circuits and integrated devices. The conductivity of semiconductors can be altered easily by varying the temperature and concentration of doping in the fabrication process. The capability to conduct electricity in semiconductor materials is considerably increased by a adding definite quantity of impurities to the crystalline lattice producing additional free electrons than holes.

Likewise, every N-type impurity atom produces a free electron in the conduction band which will drift to conduct electric current if a potential is applied to the material. N-type semiconductors can also be referred as Donors.

There is a deficit of electrons to form the fourth covalent bond and this deficiency is termed as holes. Likewise, every P-type impurity atom produces a hole in the valence band which will drift to conduct electric current if a potential is applied to the material. P-type semiconductors can also be referred as Acceptors.

A characteristic property of every material that is helpful in comparing different materials on the basis of their ability to conduct electric current is known as electrical resistivity. Resistivity can be approximated by multiplying the resistance R of an electrical wire and the cross sectional area A, divided by the length of the wire L.

For various conductors, semiconductors and insulators, the resistivity values vary linearly with variations in temperature. The change in electrical resistance per degree Celsius of temperature change is called the temperature coefficient of resistance. This factor is represented by the letter “alpha” (α).

Conductors are built with low resistive materials having resistivity values in the order of micro-ohms per meter (µΩ/m). Metals with terribly low electrical resistivity of the order of 1 x  ohm meters are called as conductors. These metals have a large number of free electrons.

These free electrons leave the valence layer of their parental atom and form a drift of electrons known as an electric current. Therefore, metals are superb conductors of electricity.

Metals like copper, aluminium, gold and silver and other non metals such as carbon are ancient conducting materials. Most of the metallic conductors are good conductors of electricity, having smaller resistance values and high conduction values.

Since there are no free electrons, when a positive potential is applied, there will be no electrical current to flow through the material giving insulating properties. Therefore insulators (non-metals) are very poor conductors of electricity.

Semiconductors have the electrical properties in between insulators and conductors. Smart examples of perfect semiconductors are silicon (Si), germanium (Ge) and gallium arsenide (GaAs). These elements have only a few electrons within the parental atomic structure that form a crystal lattice.

In this structure, each silicon atom shares one of its four valence electrons with their neighboring silicon atoms. The solid silicon crystal composed of a regular series of units of five silicon atoms. This regular and fixed arrangement of silicon atoms are unit is referred to as a crystal lattice.

Impurities like phosphorous, arsenic and antimony are added to the silicon crystalline structure, to transform intrinsic semiconductor into extrinsic semiconductor. These impurity atoms are known as pentavalent impurities as a result of the five valence electrons in the outermost shell to share the free electrons with the neighbouring atoms.

The group 3 elements such as boron, aluminium and indium are supplementary to the silicon crystalline structure having solely three electrons within the outermost shell, form three closed covalent bonds, leaving the hole in the covalent bond structure and therefore a hole in the valence band of the energy level diagram.

This action leaves an abundant number of positively charged carriers referred to as holes in the crystalline structure when there is electron deficiency. These group 3 elements are called as trivalent impurity atoms.

The presence of abundant holes attracts the neighboring electrons to sit in it. As long as the electron fills the holes in the silicon crystal there will be new holes behind the electron as it goes far from it. The newly created holes successfully attract the electrons, creating other new holes leads to the movement of holes, creating a standard electric current flow in the semiconductor. 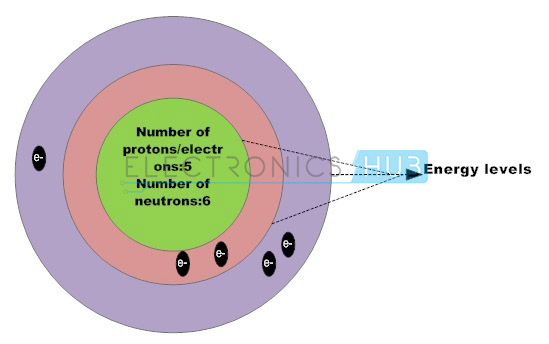 If group 3 elements such as such as boron, gallium and indium are added to the semiconductor crystal, the impurity atoms having three valence electrons form three strong covalent bonds with the silicon crystal valence electrons leaving one vacancy. This vacancy is called as a hole and it is diagrammatically represented by a small circle or positive sign due to the absence of a negative charge. 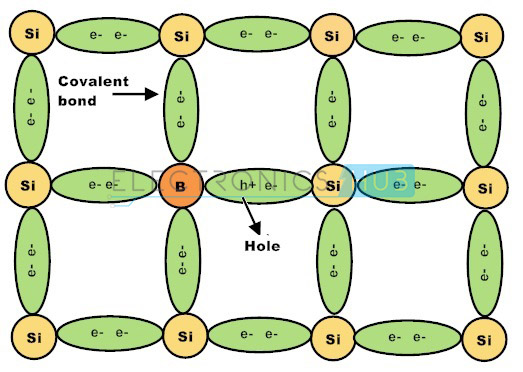 N-type materials are type of materials formed by adding group 5 elements (pentavalent impurity atoms) to the semiconductor crystals and conduct the electric current by movement of electrons.

P-type materials are a type of materials formed when group 3 elements (trivalent impurity atoms) are added to the solid crystal. In these semiconductors the current flow is mainly due to the holes.

Both p-type and N-type are electrically neural on their own because the contribution of electrons and holes required for conducting electrical current are equal due to electron-hole pair. Both boron (B) and antimony (Sb) are called metalloids because they are the most commonly used doping agents for the intrinsic semiconductor to improve the properties of conductivity.