Audio mixing is the process of combining multiple audio channels into one or more audio channels. In this process source signals, frequency content, dynamics, level and panoramic position are manipulated. This audio mixing process is used in sound recording in order to produce the output which is more appeal to listeners.

This audio mixing is also done in studios in order to produce album or single. Generally audio mixing process is carried out by the mixing engineer. Currently artists and engineers are using PC (personal computer) for audio mixing. This article describes you how to design a multi channel audio mixer using lm3900 quad amplifier. This audio mixing circuit has 2 MIC inputs and 2 line inputs. If you want to increase the input channels according to the application then add same circuit in parallel with the existing circuit. Before going to know about this circuit, get an idea about how simple audio tone control circuit works. 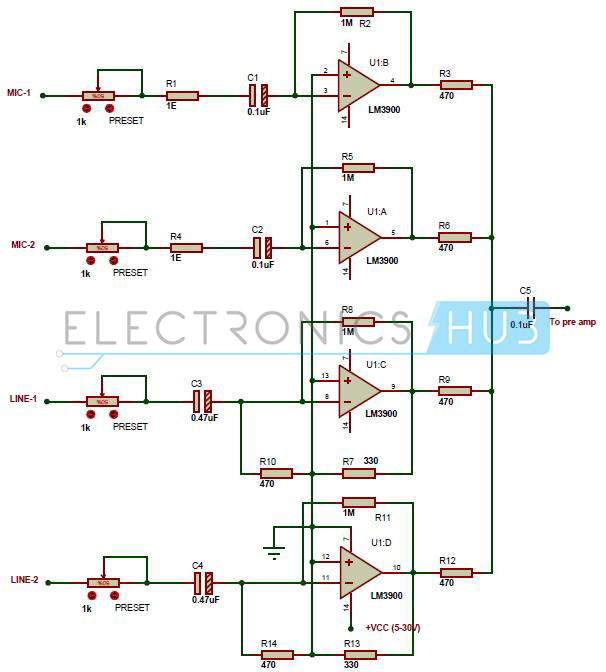 The main component in this circuit is lm3900 quad operational amplifier. Each input channel of audio mixer is connected the inverting terminal of op amp. The operational amplifier of each stage amplifies the every input signal separately. The output of each op amp is given to single output line with resistance of 470 ohm. This circuit does not have low input impedance to mix ideal audio input channels. Here polarized capacitors C1 to C4 are connected to the input channels used for decoupling purpose. Capacitor C5 is the decoupling capacitor at the output. Here variable resistor is connected to each input channel. This variable resistor is used to adjust the volume of corresponding input channel.

This IC consist of 4 high gain, independent, frequency compensated Norton amplifiers. These operational amplifiers are designed to operate for wide range of voltages. These amplifiers provide good response for almost all signal frequencies. This IC is able to provide wide band width and large output voltage swing. This IC has Inbuilt short-circuit protection. 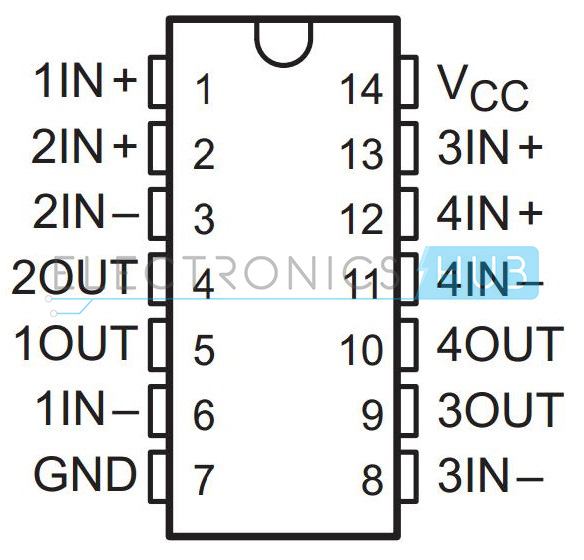 This circuit is studied theoretically and may require some changes to implement it in practical.