In the earlier post, we have studied about Simple FM Radio Jammer Circuit and its applications. Now, let us learn about one more interesting concept i.e. Cell Phone or Mobile Phone Jammer Circuit.

WARNING: Blocking or Jamming Radio Signals is illegal in most countries. Check your local laws before using such devices.

In this project, I have designed two Mobile Jammer Circuits, where the first one is using a 555 Timer IC and the other one is built using active and passive components.

After building this circuit on a perf board and supplying power to it, I have placed a mobile phone near the circuit (I am yet to turn on the switch). Before turning on the power, my mobile phone was able to capture majority of the signals as it is displaying full bars.

Once I turned on the circuit, the signal bars on the phone started to reduce and finally it stopped at a single bar.

So, in conclusion, I can say that this circuit blocks the signals but cannot completely jam them. 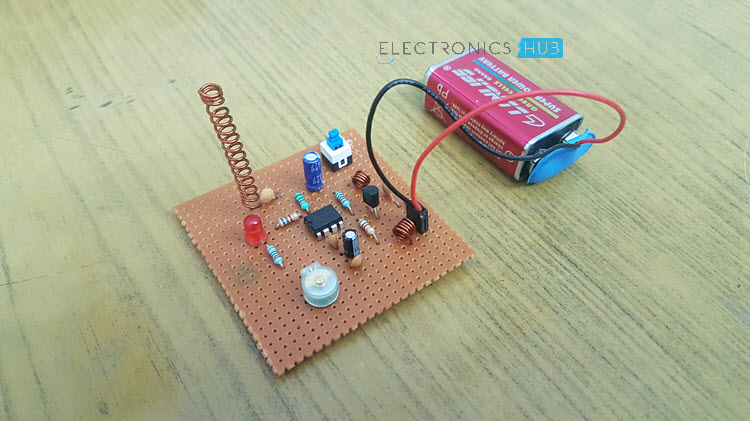 If you understand the above circuit, this circuit analysis is simple and easy. For any jammer circuit, remember that there are three main important circuits. When they are combined together, the output of that circuit will work as a jammer. The three circuits are

So the transistor Q1, capacitors C4 & C5 and resistor R1 constitute the RF amplifier circuit. This will amplify the signal generated by the tuned circuit. The amplification signal is given to the antenna through C6 capacitor. Capacitor C6 will remove the DC and allow only the AC signal which is transmitted in the air.

This circle run upto the internal resistance is generated and oscillations will get stop. RF amplifier feed is given through the capacitor C5 to the collector terminal before C6 for gain or like a boost signal to the tuned circuit signal. The capacitors C2 and C3 are used for generating the noise for the frequency generated by the tuned circuit. Capacitors C2 and C3 will generate the electronic pulses in some random fashion (technically called noise).

The feedback back or boost given by the RF amplifier, frequency generated by the tuned circuit, the noise signal generated by the capacitors C2 and C3 will be combined, amplified and transmitted to the air.

Cell phone works at the frequency of 450 MHz frequency. To block this 450MHz frequency, we also need to generate 450Mhz frequency with some noise which will act as simple blocking signal, because cell phone receiver will not be able to understand to which signal it has been received. By this, we can able to block the cell phone signal from reaching the cell phones.

You can also get good idea about another jammer circuit i.e. How TV Remote Control Jammer Circuit Works?

Know How To Make an Adjustable Timer