How to Blink an LED using Raspberry Pi and Python

In this tutorial, I will show you how to blink an LED using Raspberry Pi. In order to blink the LED, we need to access the GPIO (General Purpose Input/Output) Pins of the Raspberry Pi.

In all the previous tutorials (except in case of Touch Screen setup with Raspberry Pi), we haven’t used any of the GPIO pins on the Raspberry Pi.

Let us discuss some of the features of the Raspberry Pi’s GPIO Pins before proceeding with the further step of how to Blink an LED using Raspberry Pin and its GPIO Pins.

Before going in to the details, try to read How to configure the headless setup of Raspberry Pi? 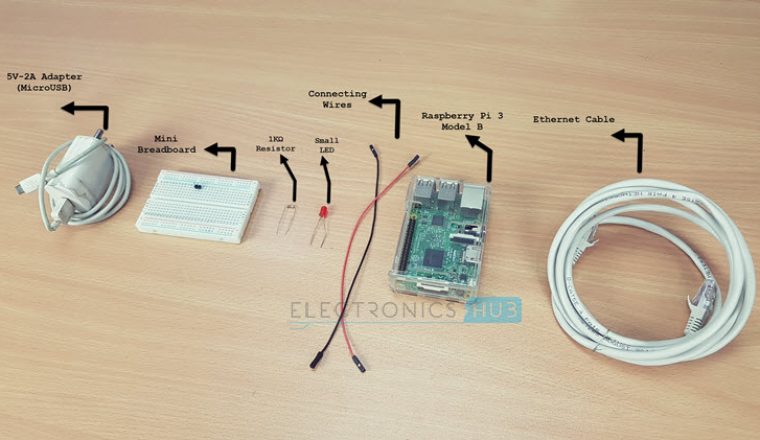 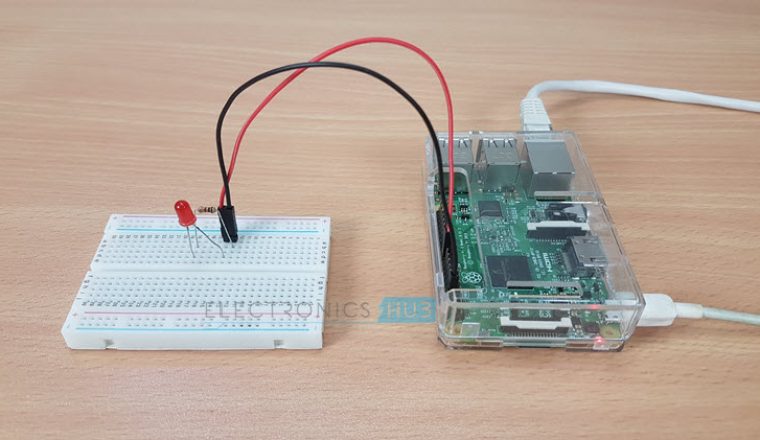 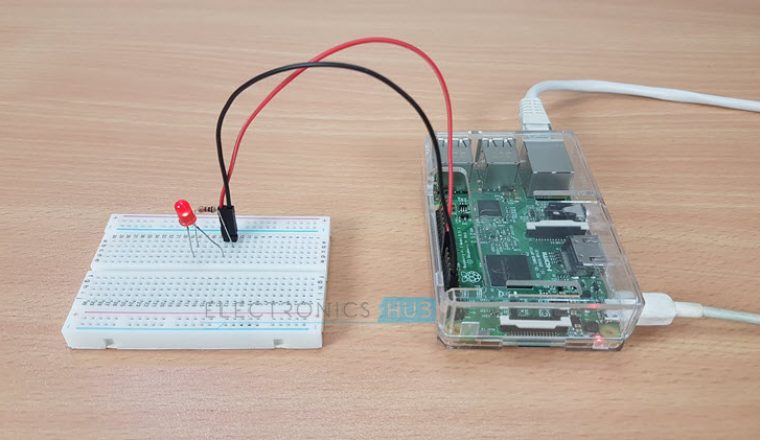 Raspberry Pi has a powerful feature in the form of the General Purpose Input / Output or simply GPIO Pins. GPIO Pins form the physical interface between the real world and the Raspberry Pi.

Different external components like LEDs, Motors, Sensors, Display, etc. are connected to the Raspberry Pi through these GPIO Pins. In our project, we are going to blink an LED using Raspberry Pi and hence the knowledge of all the GPIO Pins is important.

The following image shows the GPIO Pins of the Raspberry Pi 3 Model B board. 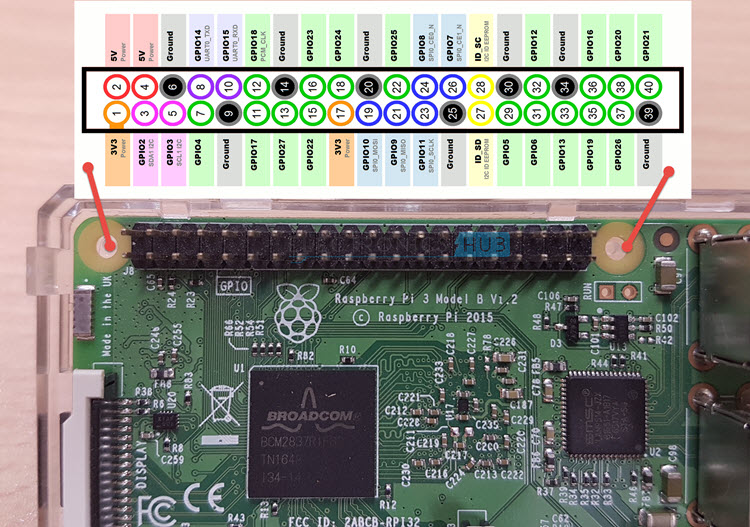 The numbers in the center (that are circled) are the Physical Pins of the Raspberry Pi. They are also called as Board Pins or Numbers. The GPIO Numbers (like Physical Pin 3 is GPIO2) are those which are seen by the Processor. This numbering is called as GPIO Numbering or BCM Numbering.

NOTE: Be careful about the numbering scheme you are going to use in your program. In this project of how to blink and LED using Raspberry Pi and Python Program, I’ve used the Board Numbering. 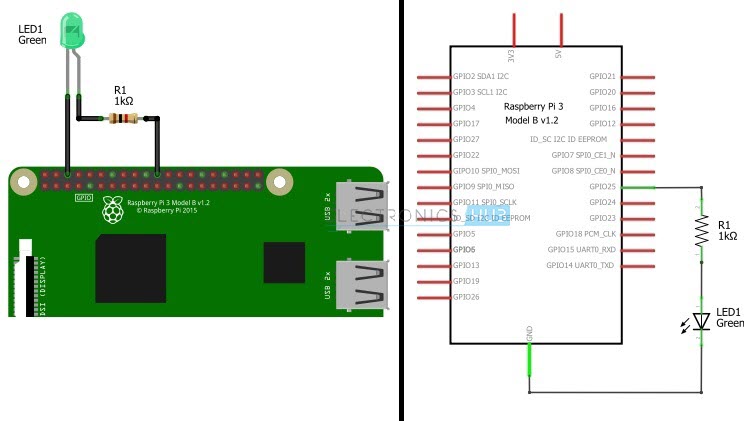 In this circuit, the GPIO Pins will act as source and provides with 3.3V when it is activated. 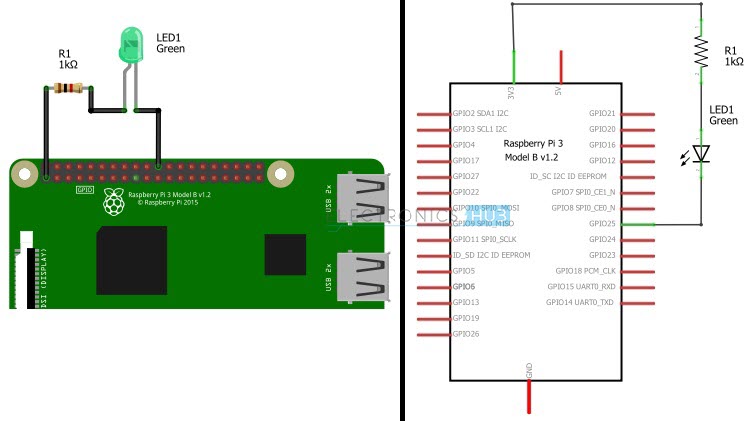 In this circuit, the GPIO pin acts as the sink (GND).

NOTE: I’ll be concentrating on the first circuit, where the GPIO pin GPIO25 acts as the source. The code explained in the further sections will be specific to this circuit. The code can also be used for second circuit with slight or no modifications.

Also read this: Your first Python Program on Raspberry Pi

The principle of operation is very simple. The GPIO pin (GPIO25) is made HIGH for a second and is made LOW for the next second. This process is kept on loop so that we get effect of Blinking LED.

In order to control the GPIO Pin i.e. making it HIGH and LOW, I’ll be using Python programming and few Python Packages.

Code for Blinking an LED with Raspberry Pi

How to operate the Blinking LED using Raspberry Pi?

First of all, I’ve used the Vim Editor for writing the Python Program. Vim is a Command Line Editor and is a very simple and easy to use text editor. First, login in to your Raspberry Pi using SSH (like Putty for example).

To install the Vim Editor (by default, Raspbian has Vi editor and to get full features of Vim), enter the following code in the SSH Terminal.

Now open a blank Python file using Vim editor with the file name being blinkLed.py. For this, use the following command.

NOTE: I’ve created a folder Python_Progs in the Desktop of the Raspberry Pi. So, first I should be present in that directory and then create the above Python file. (To change directories, use cd command).

After opening the blinkLed.py file, copy the above code and paste it there. Since it is a Python code, you need to be careful with the Tab characters as it is important to group the instruction as blocks in Python.

Save the blinkLed.py file and close the Vim Editor. To check the code, use the following command in the SSH Terminal (Putty).

If everything goes well, your LED should blink at an interval of 1 second i.e. one for one second and off for the other second.

In the Python program, first we have imported two packages RPi.GPIO and time. The package RPi.GPIO will help us in controlling the GPIO Pins of the Raspberry Pi.

NOTE: For GPIO Numbering, you can use GPIO.setmode(GPIO.BCM).

The next function is the setup(pin,mode). This function will allow us to set the pin as either input (GPIO.IN) or as output (GPIO.OUT). In the program, I have set the ledPin as output by using GPIO.setup(ledPin, GPIO.OUT).

The last function is the GPIO.cleanup(). With the help of this function, we can make a clean exit from the program as it will clean all the resources that are used in the program.