You are here: Home / Transistors / Working of FET as a Switch

In this tutorial, we will learn about Field Effect Transistors or FET, its working, regions of operation and see the working of a FET as a Switch. We will see both how both JFET and MOSFET can be used in switching applications.

FETs are the 2nd generation transistors after the BJTs. These can be used as amplifiers in oscilloscopes, testing and measuring instruments, electronic voltmeters, etc. and also used in switching actions.

Let us see in detail of the working of a FET as a switch. But before that, we have to first take a look at the basics of a FET and its operation.

FET and its Operating Regions

Field Effect Transistor is a unipolar device in which the current is carried only by the majority carriers (either by hoes or electrons). FET is a voltage controlled device that means, by controlling the voltage between gate and source, the output current gets varied.

Let us consider N channel JFET for understanding the operating regions. The operation or characteristics of JFET divided into three different regions, namely ohmic, saturation and cutoff region. The voltage applied to the drain is termed as VDS (some times also referred as VDD) and the voltage to the gate is termed as VGS or VGG. 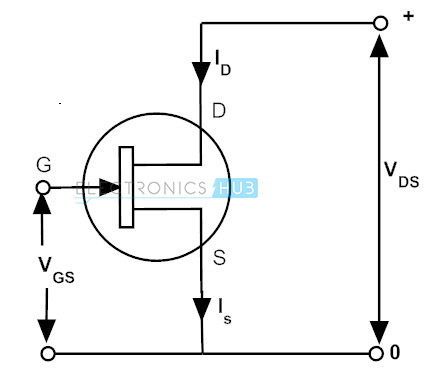 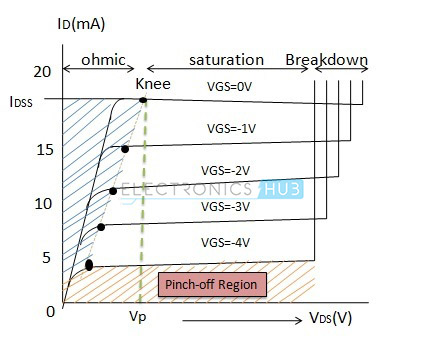 Modes of Operation of FET

In this region channel depletion layer is very small and the FET acts as a variable resistor.

In this, the VDS value is greater than zero and less than VP so there is no pinch off of the channel and the current ID increases. When we increase the gate source voltage VGS, the channel conductance falls and the resistance is increased. Therefore, the depletion regions will spread more that makes a narrow channel. The channel resistance changes generally from 100 ohms to 10K ohms and obviously controls the voltage. Hence transistor acts as voltage controlled resistor in this region.

This region starts from the point where  VDS is greater than VGS minus VP, here VP is the pinch-off voltage. In this region, the drain current ID entirely depends on the VGS and not a function of VDS. The FET operates in this region to amplify the signals as well as for switching operations. From the figure it is observed that when VGS is zero, the maximum current ID flows. When we change the VGS more negative, then, the drain current is falling. At a particular value of VGS the drain current flows constantly through the device. Hence, this region is also called constant current region.

This is the region in which the drain current ID is zero and the device is OFF. In this the gate source voltage VGS is less than pinch off voltage VP. This means the value of VGS is more negative than VP. Therefore, the channel closes and doesn’t allow any current flow through the device.

FET as a Switch (JFET)

From the above discussion, it is clear that the FET can be used as a switch by operating it in two regions, they are cutoff and saturation region. When the VGS is zero the FET operates in saturation region and maximum current flows through it. Hence it is like a fully switched ON condition. Similarly, when the VGS applied is more negative than the pinch off voltage, FET operates in cutoff region and doesn’t allow any current flow through the device. Hence FET is in fully OFF condition. The FET can be used as switch in different configurations, some of these are given below.

FET Used as a Shunt Switch

Let us look at the below figure where FET is connected in parallel with the load and it acts like an analog switch. 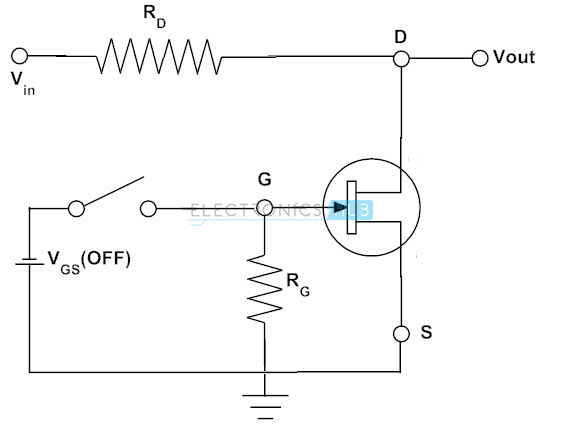 FET as a Parallel Switch Circuit

FET Used as a Series Switch 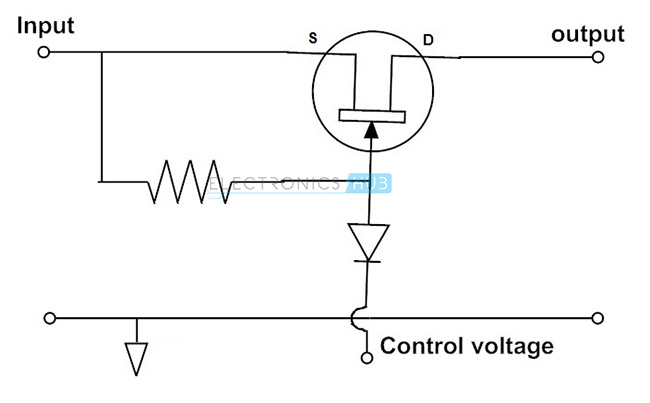 FET as a series Switch Circuit

Example of N-Channel JFET as a Switch

The below figure demonstrates how a N-channel JFET used to switch the LED. The LED is connected between supply and source terminal through a resistor. Here resistor is used to limit the current through the LED. Gate terminal of the transistor connected to the negative supply. 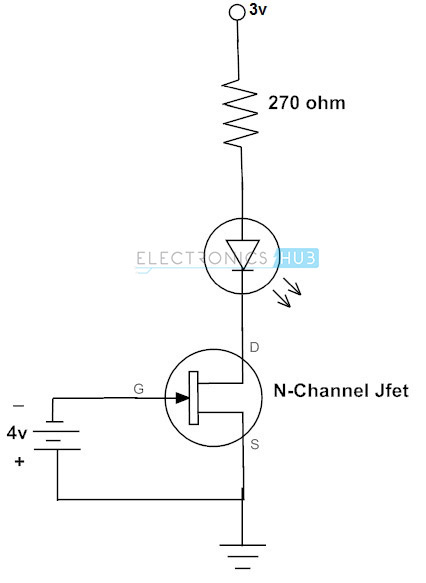 P Channel JFET as a Switch

Up to now we have discussed about N channel JFET as a switch. Another type of JFET is a P channel JFET and the operation of this FET is also similar to N-type, but only the difference is the positive voltage at the gate terminal. 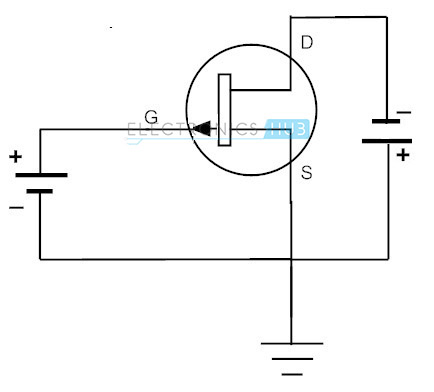 Example of P-channel JFET as a Switch

Similar to the N-channel JFET driven LED, P-channel JFET switched LED circuit is given below. The difference between the two circuits is the supply source at the gate terminal. 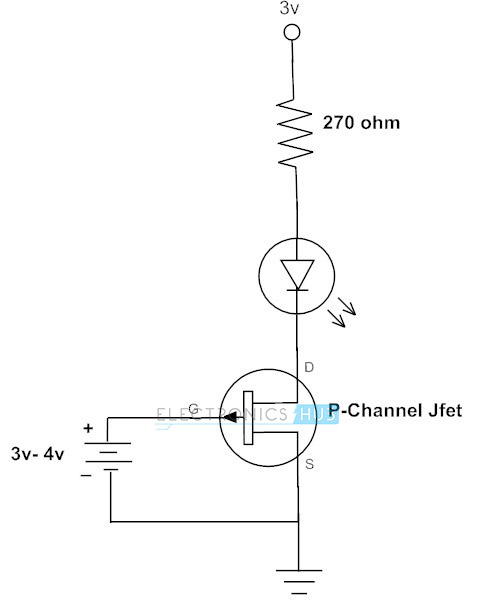 MOSFET as a Switch

MOSFET operates in the cutoff mode when VGS is below the threshold level. Therefore, no drain current flows in this mode. Hence acts as OPEN switch

For a better understanding consider the below figure where N-channel enhancement type MOSFET is switched for different voltages at the gate terminal. 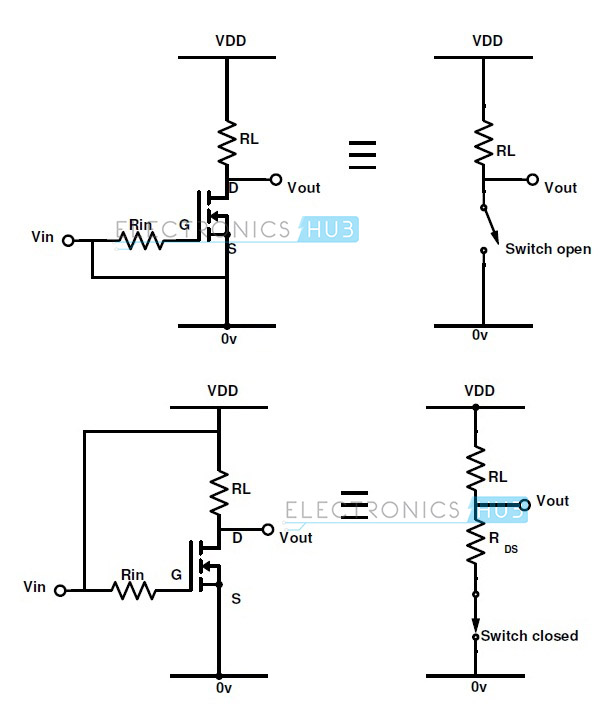 MOSFET as a Switch Circuit

Example of MOSFET as a Switch

Let us consider the MOSFET circuit which drives the LED as shown in figure. Here N-channel enhancement MOSFET is used to switch the LED with a simple switch. 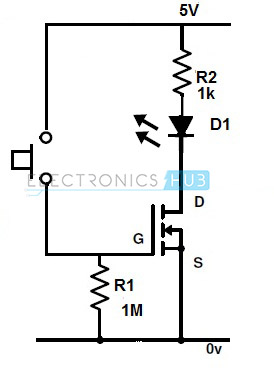 Most of the circuits use MOSFET as switch compared to JFET due to the advantages offered by it. We can also use switching circuit (to operate the load at particular switching frequency) for the JFETs and MOSFETs for getting the PWM signals based on the load requirements.

We hope that this overall information given might have enabled you to understand how can we switch the loads using FETs with switching conditions and necessary figures. You can also write us for any doubts or technical help on this concept in comment section below.