In this tutorial, let us try to understand the need for a logic level converter, different ways to shift logic levels and finally how a Bidirectional Logic Level Converter works. This is very important if you want to connect 5V devices like Arduino to 3.3V devices like ESP8266 or Nokia 5110 LCD. 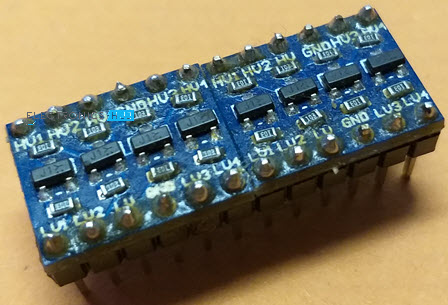 What is Logic Level?

Logic Level of a signal is the voltage or state in which it can exist. In the World of Digital Electronics, the inputs and outputs are allowed to have only two voltage levels or states, which is usually referred to a Logic 1 and Logic 0, or ON and OFF or TRUE and FALSE or HIGH and LOW.

Depending on the type of the Logic Family, the voltages for these logic levels vary. If we take a trip down the memory lane, then we can remember some of the logic families as:

Each logic family is defined with its own logic voltage levels corresponding to logic High and Logic Low and their thresholds for both input and output. Let us focus of the two of the important logic families in the history of semiconductors: the TTL and the CMOS. 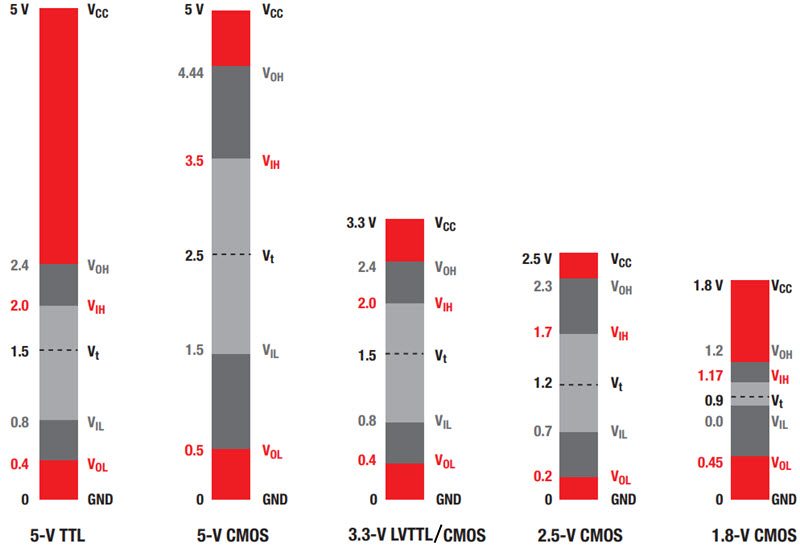 In the above image there are some symbols like VIL, VIH, VOL, etc. The following table gives you the meaning of those symbols.

Why Do We Need to Shift Logic Levels?

For the sake of comparison, let us select the 5V TTL, 5V CMOS and 3.3V CMOS Logic Families (as CMOS became the dominating technology in modern VLSI and TTL is popular in earlier “74” series of ICs).

What if we want to connect a 5V device with a 3.3V device or vice-versa? If you look closely at the above image with threshold voltages, then you can understand the problem.

Most 3.3V device can tolerate up to 3.6V and anything more than that will fry the IC. So, you have to take extreme care while connecting ICs or devices with different logic levels.

There are two ways in which you can solve this problem. One is the crude way of using a Voltage Divider circuit and the other way (also a better way) is to use Logic Level Converter or Logic Level Shifter.

I made a dedicated tutorial on basics of voltage divider. So, for more in-depth information, take a look at the “VOLTAGE DIVIDER CIRCUIT” tutorial. 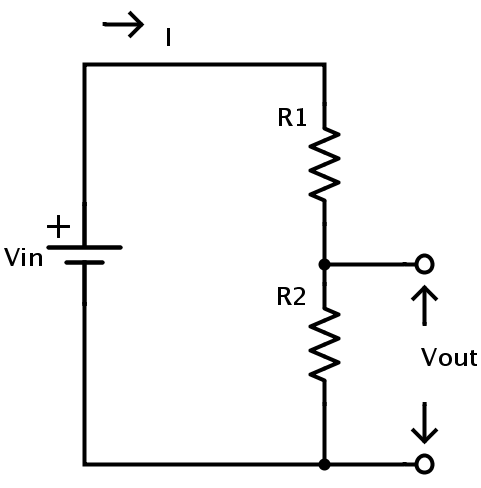 From basic circuit theory, we can deduce the equation for VOUT as:

However, voltage divider is not an ideal solution for logic level conversion. Use this method only for slow signals and for switch inputs. It is not a reliable method for use in high-speed signals like I2C or SPI.

If you want to connect a 3.3V I2C or SPI Sensor to a 5V device like Arduino with support for two-way communication, then the solution is to use an External Level Shifter or a Logic Level Converter.

The Logic Level Converter presented here supports bidirectional level shifting by using one MOSFET per bus line and it also protects the low voltage side from spikes at the high voltage side.

Consider the following circuit consisting of an N-Channel MOSFET with internal Drain – Substrate Diode (it is important to have one). Let us divide the circuit into two parts the left side or the low voltage side and the right side or the high voltage side.

Each side has different supply voltages and also different logic levels. The bus in the low voltage side is pulled HIGH to 3.3V and also the device power supply on this side is 3.3V.

Let us now see how the above setup works as a bidirectional logic level converter. To understand the working clearly, let me divide the operation into three states.

As both the Gate and Source of the MOSFET are connected to 3.3V, VGS is 0V, which is below the threshold voltage of the MOSFET. As a result, the MOSFET is not conducting and this allows the high voltage bus to be pulled high to 5V.

So, in this state, both sides of the bus are at logic HIGH but at different voltage levels.

3.3V Device Pulls Down the Bus

The second state is when the 3.3V device pull the bus down to logic LOW level. The gate of the MOSFET is still at 3.3V but the source becomes low. As a result, the VGS becomes 3.3V, which is greater than the threshold voltage of the MOSFET and this allows the MOSFET to conduct.

Since the MOSFET is now conducting, the high voltage bus is pulled down by the 3.3V device to logic LOW. Hence, both sides of the bus are at logic LOW of same voltage level.

5V Device Pulls Down the Bus

In the third state, the 5V device pulls the high voltage side bus to logic LOW level. Through the Drain – Substrate diode, the low voltage side is pulled down until the VGS reaches the threshold voltage.

The MOSFET now starts conducting which will further pull the low voltage side bus to logic LOW voltage level by the 5V device. Even in this case, both sides of the bus are at logic LOW level at same voltage.

So, if you combine the three states, we can conclude that logic levels are shifted in both the direction.

Phillips published a beautiful Application Note on this topic called “Bi-directional level shifter for I²C-bus and other systems”. Search for “AN97055” for more information.

Many module manufacturers are combining 4 such MOSFET based level shifting circuits to develop a 4- bus or 4-channel Logic Level Converter Modules.

The schematic of one such module is shown in the following image.

If you take a look at the image of a typical 4-channel Level Shifter Module, it consists of 12 pins in two rows. The top row consists of high voltage supply and ground pins (HV and GND) and 4 high voltage channels (HV1, HV2, HV3 and HV4).