When the differences between microprocessor and microcontroller are mentioned in the previous tutorial, the main difference can be stated as on-chip memory i.e., a Microcontroller has both Program Memory (ROM) and Data Memory (RAM) on the same chip (IC), whereas a Microprocessor has to be externally interface with the memory modules.

Basically, Microprocessors or Microcontrollers are classified based on the two types of Computer Architecture: Von Neumann Architecture and Harvard Architecture.

Since the Instruction Memory and the Data Memory are the same, the Processor or CPU cannot access both Instructions and Data at the same time as they use a single bus.

This type of architecture has severe limitations to the performance of the system as it creates a bottleneck while accessing the memory. 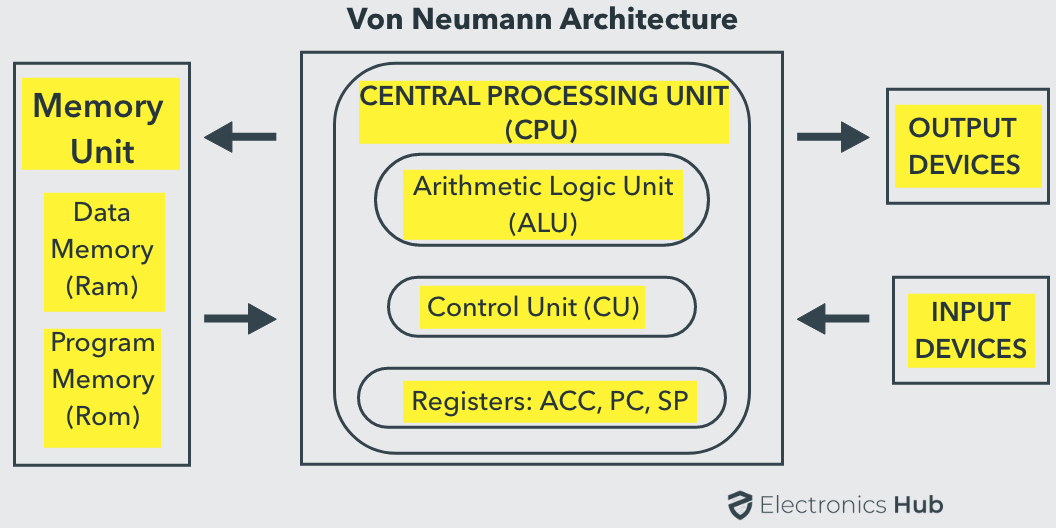 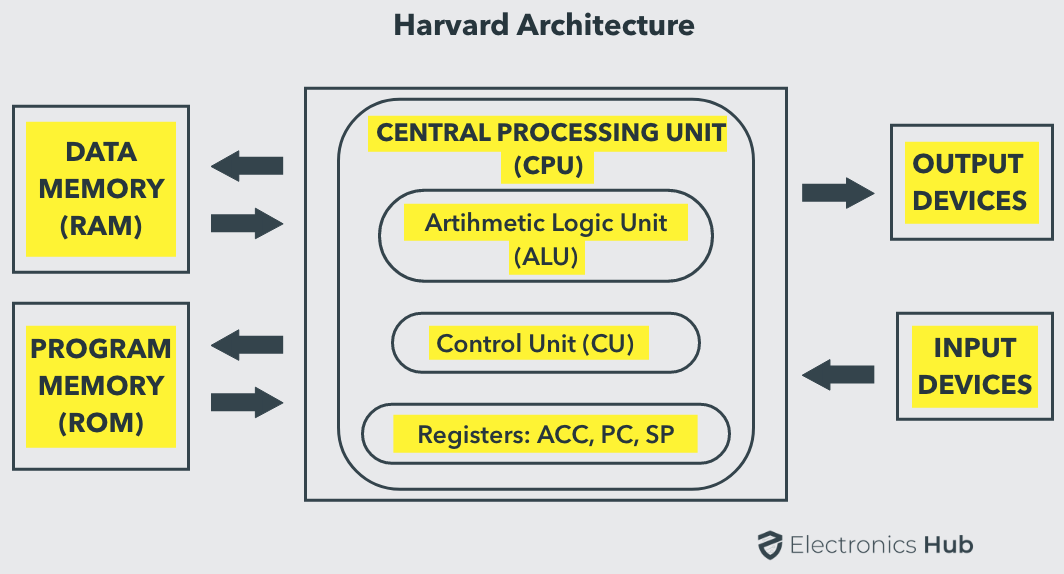 8051 Microcontroller has both Internal ROM and Internal RAM. If the internal memory is inadequate, you can add external memory using suitable circuits.

Some variants of 8051 like the 8031 and 8032 series doesn’t have any internal ROM (Program Memory) and must be interfaced with external Program Memory with instructions loaded in it.

Almost all modern 8051 Microcontrollers, like 8052 Series, have 8KB of Internal Program Memory (ROM) in the form of Flash Memory (ROM) and provide the option of reprogramming the memory. 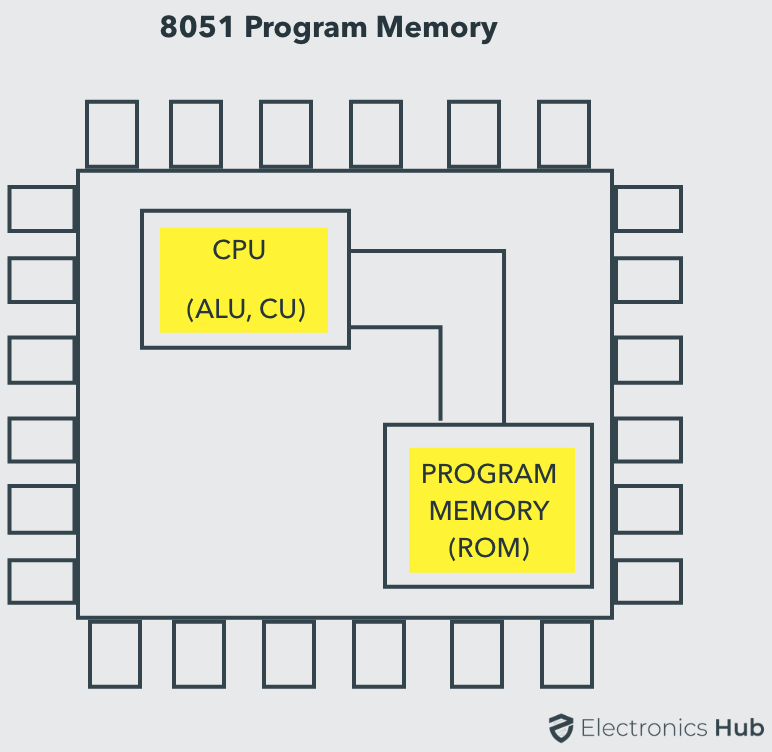 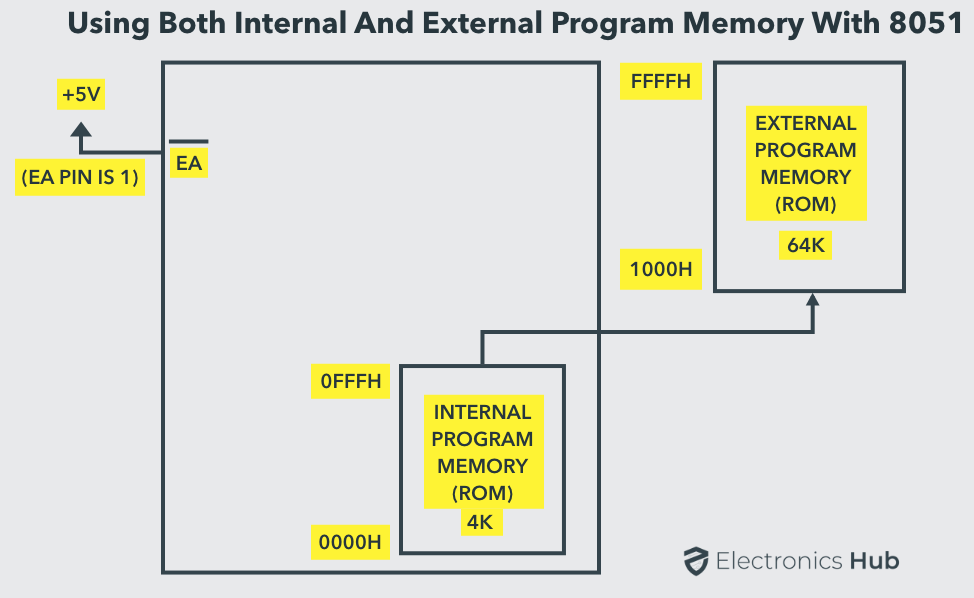 There is another way to fetch the instructions: ignore the Internal ROM and fetch all the instructions only from the External Program Memory (External ROM). For this scenario, the EA Pin must be connected to GND. In this case, the memory addresses of the external ROM will be from 0000H to FFFFH. 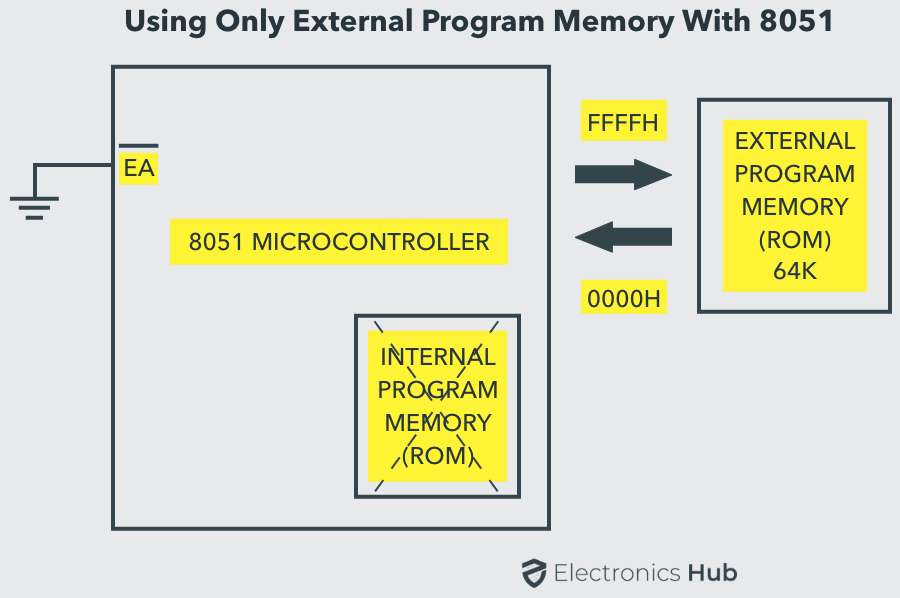 But almost all modern variants of 8051 Microcontroller have 256B of RAM. In this 256B, the first 128B i.e., memory addresses from 00H to 7FH is divided in to Working Registers (organized as Register Banks), Bit – Addressable Area and General Purpose RAM (also known as Scratchpad area).

In the first 128B of RAM (from 00H to 7FH), the first 32B i.e., memory from addresses 00H to 1FH consists of 32 Working Registers that are organized as four banks with 8 Registers in each Bank. 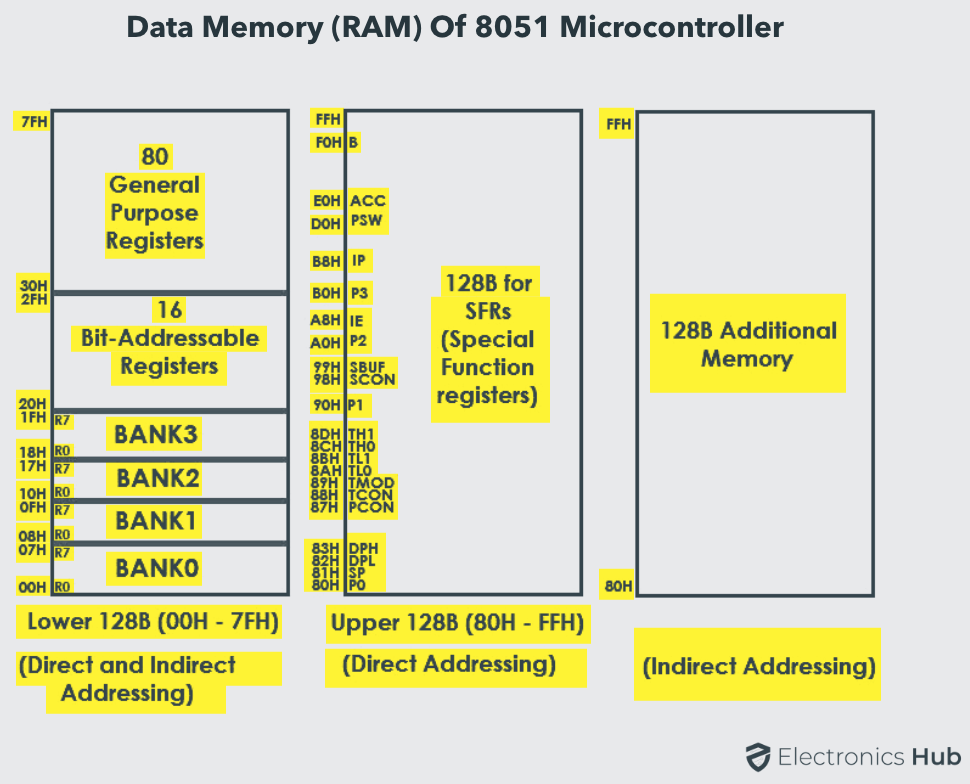 The 4 banks are named as Bank0, Bank1, Bank2 and Bank3. Each Bank consists of 8 registers named as R0 – R7. Each Register can be addressed in two ways: either by name or by address.

To address the register by name, first the corresponding Bank must be selected. In order to select the bank, we have to use the RS0 and RS1 bits of the Program Status Word (PSW) Register (RS0 and RS1 are 3rd and 4th bits in the PSW Register).

When addressing the Register using its address i.e., 12H for example, the corresponding Bank may or may not be selected. (12H corresponds to R2 in Bank2).

For example 32H is the bit 2 of the internal RAM location 26H.

The final 80B of the internal RAM i.e., addresses from 30H to 7FH, is the general purpose RAM area which are byte addressable.

These lower 128B of RAM can be addressed directly or indirectly.

The upper 128B of the RAM i.e., memory addresses from 80H to FFH is allocated for Special Function Registers (SFRs). SFRs control specific functions of the 8051 Microcontroller. Some of the SFRs are I/O Port Registers (P0, P1, P2 and P3), PSW (Program Status Word), A (Accumulator), IE (Interrupt Enable), PCON (Power Control), etc. 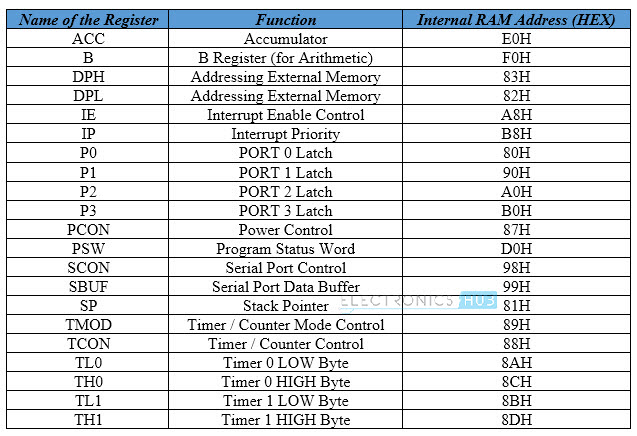 SRFs Memory addresses are only direct addressable. Even though some of the addresses between 80H and FFH are not assigned to any SFR, they cannot be used as additional RAM area.

In some microcontrollers, there is an additional 128B of RAM, which share the memory address with SFRs i.e., 80H to FFH. But, this additional RAM block is only accessed by indirect addressing.

It is always good to have an option to expand the capabilities of a Microcontroller, whether it is in terms of Memory or IO or anything else. Such expansion will be useful to avoid design throttling. We have seen that a typical 8051 Microcontroller has 4KB of ROM and 128B of RAM (most modern 8051 Microcontroller variants have 8K ROM and 256B of RAM).

The reason for interfacing external Program Memory or ROM is that complex programs written in high – level languages often tend to be larger and occupy more memory.

Another important reason is that chips like 8031 or 8032, which doesn’t have any internal ROM, have to be interfaced with external ROM.

A maximum of 64KB of Program Memory (ROM) and Data Memory (RAM) each can be interface with the 8051 Microcontroller. 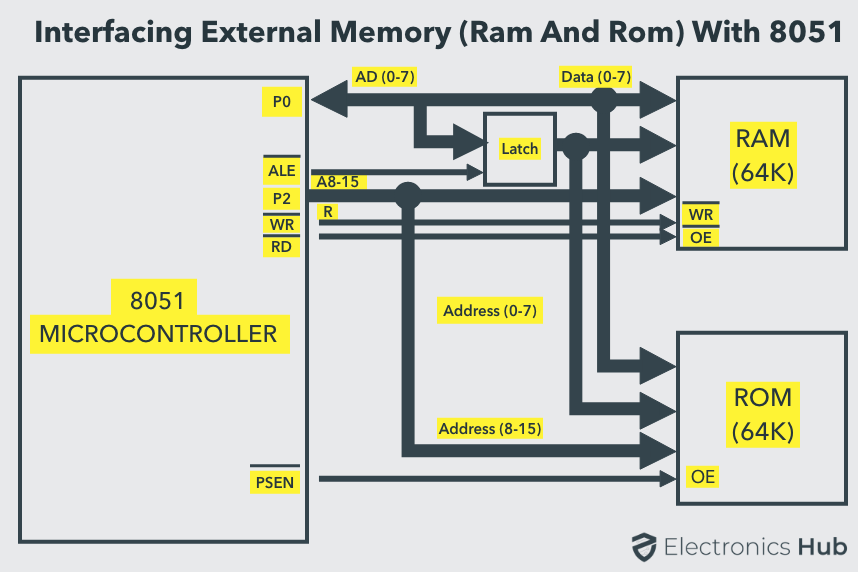 An important point to remember when interfacing external memory with 8051 Microcontroller is that Port 0 (P0) cannot be used as an IO Port as it will be used for multiplexed address and data bus (A0 – A7 and D0 – D7). Not always, but Port 2 may be used as higher byte of the address bus.