What is Load Factor? Importance, Calculation and Improvement

In this tutorial, we will learn about Load Factor, what is its importance, a simple example to calculate LoadFactor and also different ways to improve the LoadFactor.

Almost everything in the World is somehow dependent on Electric Power. From operating your mobile phone to building an Airbus A380, everything requires electricity. The demand for electricity is always increasing and the need for better and efficient ways to generate electric power is higher than ever before.

Power Plants, whether Hydro or Thermal or Nuclear, generate a large quantity of electricity by converting mechanical energy to electrical energy. Irrespective of the method used for generation, power must be carried from the generating stations to the destination i.e. the consumer.

Due to uncertain demands of power by the consumer, the amount of load on the power station varies from time to time. For example, during summer in India, the demand for electricity increases drastically as everyone tries to turn on their air conditioning units.

But the demand will be less during winter as the air conditioning units will be scarcely used, at least in case of residential users. Regardless of the demand, the power plants must be able to meet the requirements instantly.

Before going into the topic of discussion, the LoadFactor, let us first take a look at some of the commonly used terms and their definition in the world of Power Generation.

It is a graph representing the load on a power station with reference to hourly time intervals. The Load Curve shows the variations of load on a generating station as a function of time.

The following graph shows a typical load curve of a power station for a period of 24 hours with load in megawatts. 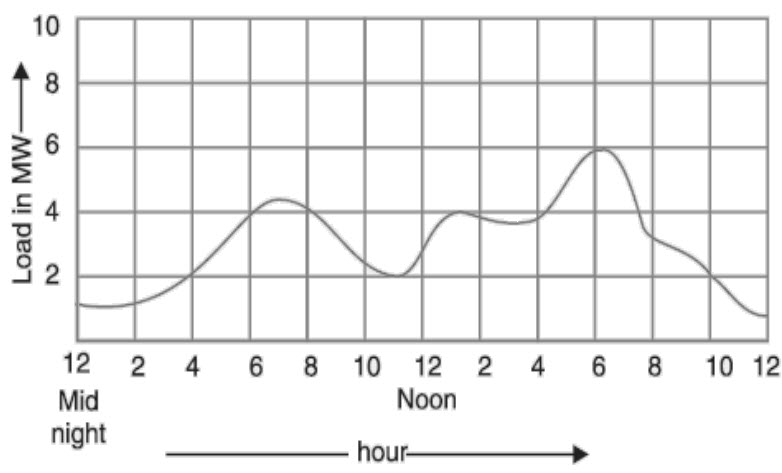 Knowing the Maximum Load is important as it helps in determining the capacity of the power plant.

What is Load Factor?

Now coming to Load Factor, it is simply the ratio of Average load to the Maximum or Peak Load during a given period of time. Using LoadFactor, you can easily express the usefulness of a generating station in essence, it determines the efficiency of a power plant.

If we assume that the generating station is in operation for a certain number of hours, then

Depending on the duration of observation, LoadFactor can be calculated on Daily, Monthly or Yearly basis. It is important to observe that the value of LoadFactor will always be less than 1.

LoadFactor acts as a useful factor is describing the electricity consumption characteristics over a period of time as it is an expression of how much energy was used in a given time period versus the amount of energy that would have been used if the power is left on during peak demand.

At the consumer side, an improved load factor means that demand is reduced and will essentially decrease the average unit cost of kWh. This means that for large industries and commercial operations, increasing load factor will definitely lead to significant amount of savings.

Why is Load Factor Important?

Before seeing examples of how to calculate load factor, let us understand the importance of load factor. Every power generating station should be able to meet the peak load demand of electricity at any given time.

Mathematically, Daily Load factor is given by

Similarly, Monthly and Yearly LoadFactors can be calculated.

For example, the monthly consumption is 48000 kWh and peak demand is 100 kW, then monthly LoadFactor is calculated as follows:

In this example, the 50 % LoadFactor indicates that the monthly consumption was 50% of the total energy available for use at peak demand of 100 kW.

How can we improve Load Factor?

As mentioned earlier, having a higher lower LoadFactor is always desirable. For any consumer, commercial or industrial, lowering its peak demand will be first step in improving the load factor and as a result, reducing the electricity bill amount.

For example, assume an industry with 10 loads or machines. Instead running all the loads at the same time, if certain number of loads are operated in specific time periods, the peak demand would be reduced.

Another way to improve LoadFactor is to analyze the previous electricity bills and identify the periods of peak demand, like summer for example. Make necessary changes so that all the high wattage cooling equipment are not running simultaneously but are scheduled for efficient distribution of peak usage.