Filter is a circuit which is used to filter the signals that is it will pass only required signals and avoid unwanted signals. Generally filters are designed by either passive components or active components.

Generally these filters are preferable below the frequency 100 kHz. The cut off frequency is also called as break frequency or turn over frequency.

A Low Pass Filter circuit which is designed by passive components is referred as passive low pass filter.

The following image shows a simple circuit of RC Low Pass Filter is shown below.

Since it has only one reactive component this circuit can also termed as ‘one pole filter’ or ‘First order filter’. The input voltage ‘Vin’ is applied in series to the resistor and the output voltage is taken only across the capacitor.

The capacitive reactance can be formulated as follows: 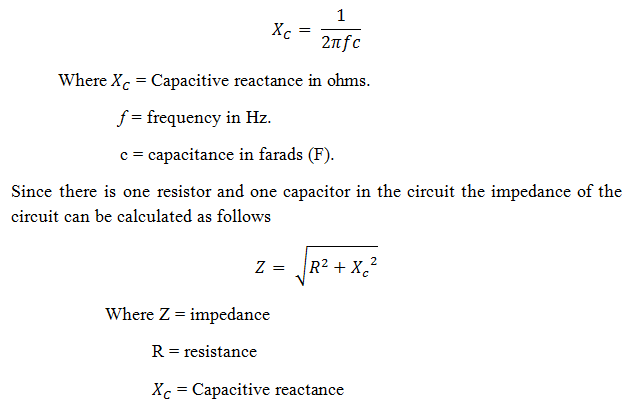 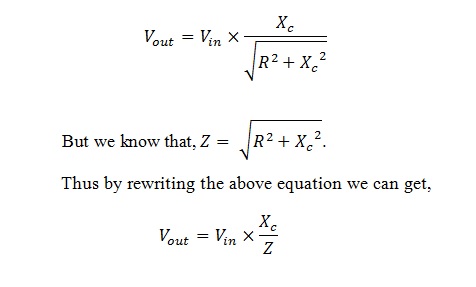 By using this equation we can calculate the value of the output at any applied frequency. 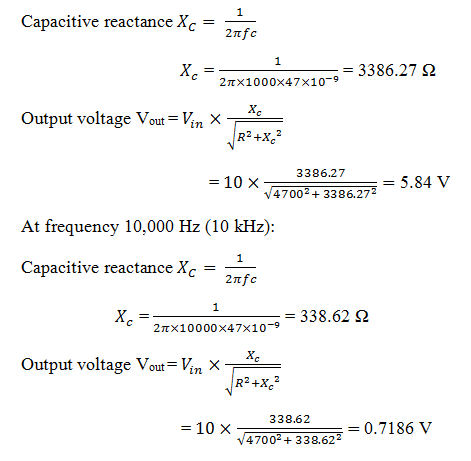 From the above example it is observed that the capacitive reactance is decreased from 3386.27 ohms to 338.62 ohms, whereas the output voltage decreased from 5.84 volts to 0.718 volts with the increase of the frequency from 1 kHz to 10 kHz. 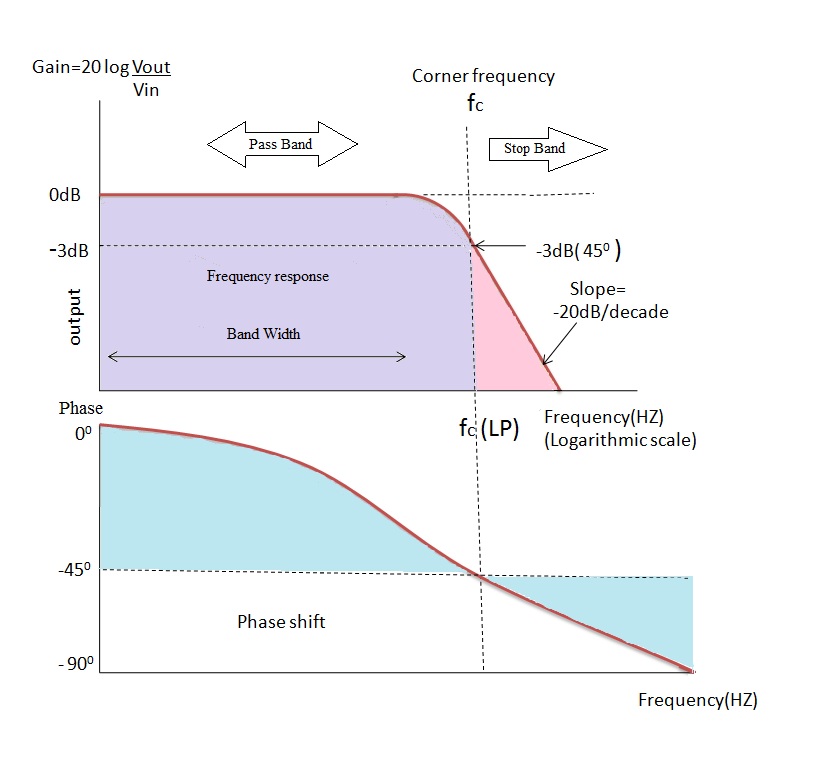 From the introduction to filters we already saw that the magnitude |H(jω)| of the filter is taken as the gain of the circuit. This gain is measured as  20 log (Vout / Vin) and for any RC circuit the angle of the slope ‘roll-off ‘ is at -20 dB/ decade is same.

This cut off point will occurs when the resistance value and the capacitive reactance value coincides which means the vector sum of the resistance and reactive capacitance are equal. That is when R = Xc and at this situation the input signal is attenuated by -3dB/decade.

If the input frequency of the filter increases the lagging angle of the circuit output signal increases. Simply for the more frequency value the circuit is more out of phase.

The capacitor has more time to charge and discharge the plates at low frequencies because the switching time of the sine wave is more. But with the increase of frequency the time taken to switch to the next pulse is gradually decreases. Due to this the time variations occurs which leads to phase shift of the output wave.

We can also rewrite in terms cut off frequency as

By this we can say that the output of the filter depends on the frequencies applied at the input and on the time constant.

Let us calculate the cut off frequency of a low pass filter which has resistance of 4.7k and capacitance of 47nF.

We know that the equation for the cut off frequency is

Till now we have studied first order low pass filter which is made by connecting a resistor and capacitor in series. However sometimes a single stage may not enough to remove all unwanted frequencies then second order filter are used as shown below.

Where n is the order or number of stages

Second order low pass filter -3dB frequency is given as

Where fc  is cut-off frequency and n is the number of stages and ƒ-3dB is -3dB pass band frequency.

Low Pass Filter is made up of a resistor and capacitor. Not only capacitor but any reactive component with resistor gives low pass filter. It is a filter which allows only low frequencies and attenuates high frequencies.

At cut-off frequency the output signal phase shift is 45°.

If we interchange the positions of the resistor and the capacitor in low pass filter circuit then the circuit behaves like high pass filter.

For sinusoidal input waves the circuit behaves like a first order low pass filter. The operation of the first order filter is we have already studied but when the input signal type changes then what happens to the output of the filter have to be observed.

When we change the input signal type to either switch mode (ON/OFF) or else square wave the circuit behaves like an integrator which is discussed as follows. 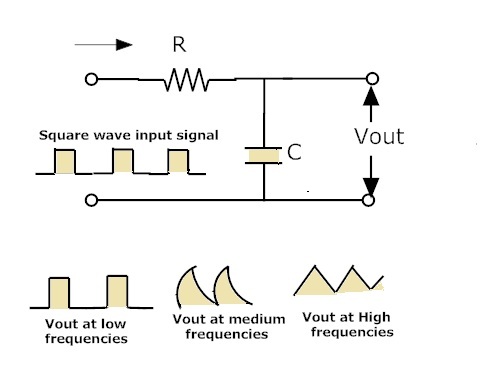 The above figure shows the performance of the filter for square input. When the input of the low pass filter is a square wave then obtained output of the filter will be in triangular form.

This is because the capacitor cannot acts as ON or OFF switch. At low frequencies when the input of the filter is square wave then the output will also be in the square wave only.

When frequency increases then the output of the filter appears like a triangular wave. Still if we increase the frequency then the amplitude of the output signal decreases.

Applications of the Low pass filter