It is necessary to add the additional components to bypass or circumvent the shaded or damaged parts of PV (photovoltaic) cells, to continue the producing of power usually. These additional components which allow the flow of current through PV cells when the cells are not able to produce power can be termed as bypass diodes.

These diodes are necessary because a small damage or any disturbance in the PV module may affect the output current substantially. The effect in output current may be due to the cells in the module which are connected in series fashion, a single PV cell with some shade and due to the modules in a string can stop producing the power.

Preferably there will be one bypass diode for each and every solar cell, but this is more expensive, so that there is one diode per small group of series connected solar cells. They are normally connected along with the several solar cells where no current is allowed to pass through them in the case when all the cells are in use without any shading.

The bypass diodes are helpful in the special cases when the cells are unable to pass the current through them. This type of bypass diode connection prevents the loss of power which allows the solar group to handle the real – world problems more efficiently. 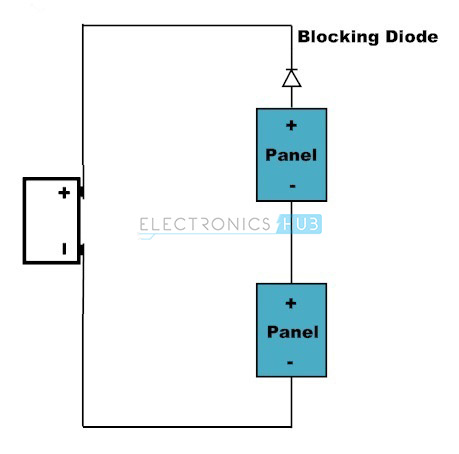 Consider the above connection, if one of the connected panels is shaded for some reason. The panel will not produce any amount of significant power and the panel will also have a higher resistance which blocks the power flowing of the unshaded panel. Then the bypass diodes came into existence as shown in the diagram. 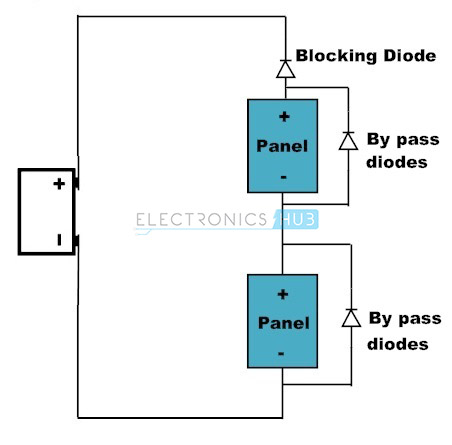 Consider if one of the panels is shaded in the above diagram, then the current of the unshaded panel flows through the bypass diode to avoid the higher resistance and current blocking of the shaded panel. Bypass diodes are useless, unless the panels are connected in a series fashion to produce high voltage.

Recently, some solar panels are being manufactured by the cells divided into groups with a built in bypass diode in that group. Solar modules with bypass diodes are manufactured because of two reasons. Primarily, the bypass diode improves the overall system performance of the solar module. The second reason is that they can provide a greater amount of product safety.

Under standard test conditions solar modules consistently can produce a maximum voltage of nearly 0.5 Vdc. The standard cell configuration of a solar module has 72 cells connected in a series fashion to produce an operating voltage somewhere nearly around 36 Vdc. Typically, a bypass diode is connected in parallel with every 24 cells in a 72 – cell solar module.

A solar cell that is shaded will not able to pass current and/or voltage to an unshaded cell through them, which causes the maximum power rating of the shaded cell to drop as a result of shading. More the cell shading more will be the drop in power. A cell with 75% shading would be more worsen than the three cells with 25% shading.

In such a case, under shaded conditions, a string of cells that are connected in a series fashion may produce a voltage drop of 12 Vdc.

However, if the bypass diodes were not present in the circuit, the effect of the shading would be even greater as the shaded solar cells draw about 12 Vdc, so that the solar module’s voltage may be reduced to 24 Vdc.

The most horrible condition that can be imaginable with a solar module that has no bypass diodes is that it may cause fire and the by-product certainly will be the heat. This is improbable but possible under certain possible conditions. After a few days of operating under the shaded conditions, the additional amount of heat produced and multiple temperature cycles may cause the solar cell joints weak.

If the joints get more weaken and disconnect, there might be a possibility of producing an electrical arc. The high temperature penetrating from the electric arc may cause the glass to explode by allowing oxygen into the lamination of glass which holds the cells in the solar panel. In such a case the high and flammable EVA which holds the glass laminate and solar cell together may catch the fire.

This condition has to be avoided at all costs. Hence, bypass diodes are therefore needed in all solar electric modules/panels.

This diode is connected in a circuit by means of metal conductors on both the top and bottom of the silicon sandwich to make panels, where they can be arranged in an arrayed fashion to provide different amounts of electricity. 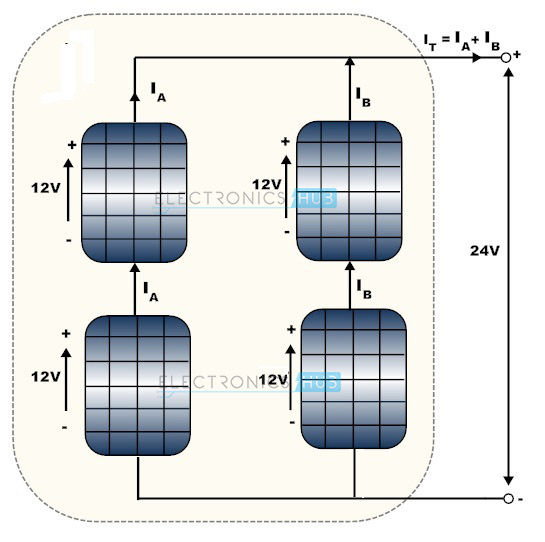 A simple photovoltaic array in the above diagram consists of four photovoltaic modules by producing two branches that are in parallel fashion where there will be two PV panels which are electrically connected together to produce a series fashioned circuit.

It is defined as the point at which the maximum amount of power is produced by the solar panel that is associated with the batteries and/or inverter load. The maximum output power point of the photovoltaic solar array panel can be usually measured in Peak Watts or Watts. It can be given as follows.

The short circuit current of the cell or panel increases slightly with the junction temperature. The below figure shows the variations in the Voc and Isc with the temperature. 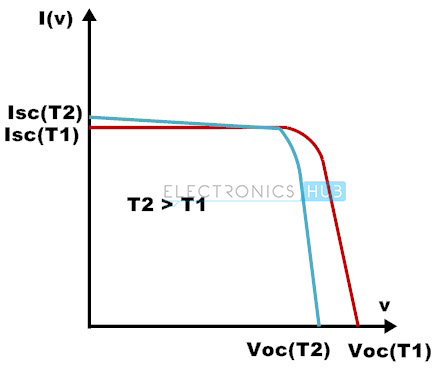 There will be a substantial bound to the amount of maximum current of a particular photovoltaic solar cell. The value of Imax of a PV solar cell or panel greatly depends on the size and structure of the cell/panel, the total quantity of sunlight directly hitting the panel/cell, its effectiveness in converting the direct sunlight power into the current and the semiconductor material type where the solar cell is fabricated from the semiconductor material either cadmium Telluride, cadmium sulphide, gallium arsenide and/or silicon and germanium etc. 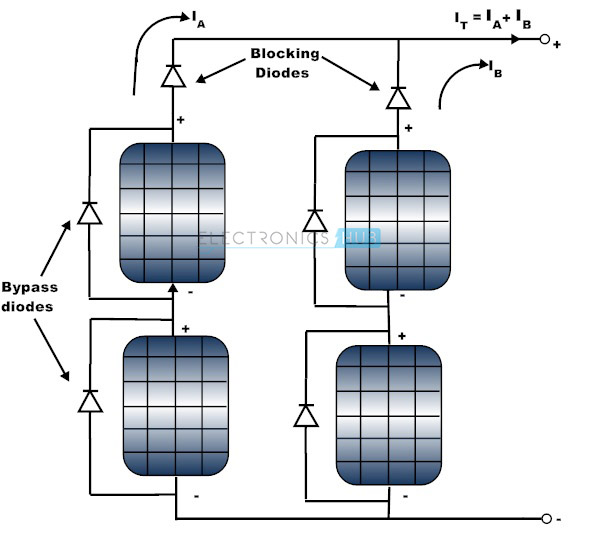 In the above circuit the diodes which are connected in parallel with solar panels are called as bypass diodes. These diodes provide the separate path for the current to flow when the solar panels are shaded or damaged.

In recent days, most of the solar panel manufacturers include both blocking and bypass diodes in their solar panel design.