Water is a very precious resource and must be properly utilized. Agriculture is one of those areas which consume a lot of water. Irrigation is a time consuming process and must be done on a timely basis.

The aim of the article is to develop an auto irrigation system which measures the moisture of the soil and automatically turns on or off the water supply system.

The project requires very less human involvement once installed. The circuit is based on PIC microcontroller and also a soil moisture sensor.

A properly configured soil moisture sensor can save up to 60 percent of water used in irrigation. The designed system can be used in turf grass or with small garden plants. 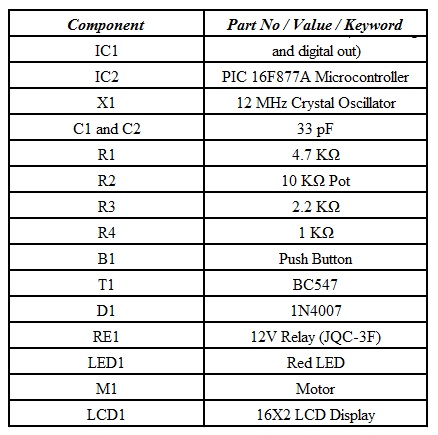 A soil moisture sensor is used to measure the volumetric water content of soil. The sensor used in the project is shown below. 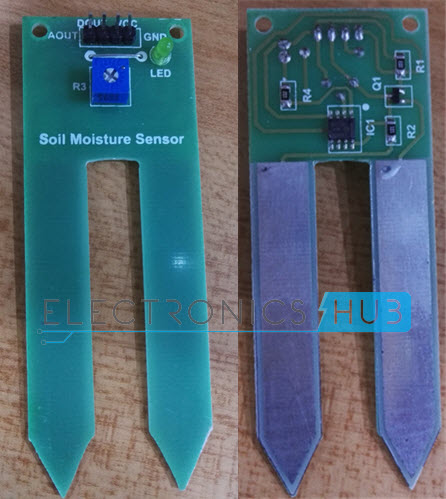 It consists of two prongs, which must be inserted in the soil, an LM358, which acts as a comparator and a pot to change the sensitivity of the sensor.

If the soil moisture sensor is not available, the following circuit can be used as an alternative. The circuit shown below has a fixed sensitivity.

This can be changed by implementing a pot in place of one of the resistors connected to the non-inverting terminal of the comparator. 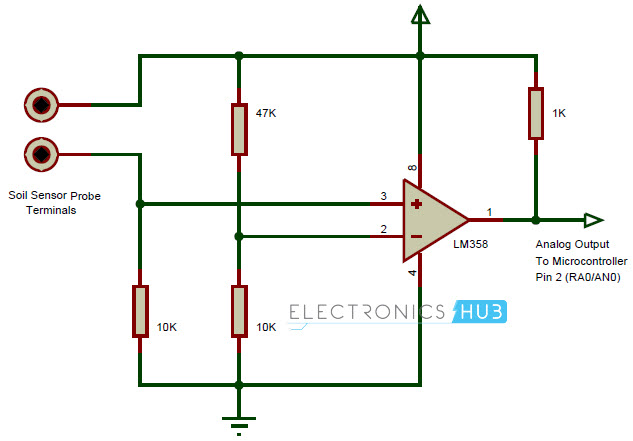 The aim of the project is to control a motor based on the moisture in the soil. The design of the circuit is as follows. PIC 16F877A is the main processing IC.

A 12 MHz crystal oscillator is connected across OSC1 and OSC2 (Pins 13 and 14). The crystal is connected with two 33pF capacitors.

The output of the soil moisture sensor is given to RA0 (Pin 2) of the PIC microcontroller.

In order to drive the relay which is connected to the motor, a transistor is used. The input to the transistor is given from RC2 (Pin 17) of PIC microcontroller.

One terminal of the relay coil is supplied with a 12 V DC. The other end of the coil is connected to the collector of the transistor. The contacts of the relay are given to the motor and AC supply.

An LED is connected between the DC supply and the collector and glows only when the motor is running.

The idea of the project is to implement an automatic irrigation system by sensing the moisture of the soil. The working of the circuit is as follows.

Wet soil will be more conductive than dry soil. The soil moisture sensor module has a comparator in it.

The voltage from the prongs and the predefined voltage are compared and the output of the comparator is high only when the soil condition is dry.

When the moisture in the soil is above the threshold, the microcontroller displays a message mentioning the same and the motor is off.

When the transistor is turned on, the relay coil gets energized and turns on the motor. The LED is also turned on and acts as an indicator.

When the moisture of the soil reaches the threshold value, the output of the soil moisture sensor is low and the motor is turned off.

The system is also designed to warn when the moisture is very high than the threshold and the soil is too wet, which is dangerous for the plant.