We have made a project using Arduino, PIR Sensor and GSM Module called GSM based Home Security System using Arduino. If you understand how a PIR Sensor works, then you can many such interesting projects and even more complex ones.

A PIR Sensor or a Passive Infrared Sensor is an electronic device that measures the infrared (IR) light emitted by the objects in its observable area. The term ‘Passive’ in the PIR Sensor indicates that the sensor actually doesn’t emit any infrared light but rather passively detects it that is emitted by its surrounding objects.

Every object, with its surface temperature greater than absolute zero i.e. -2730 C emits heat in the form of infrared radiation. Humans cannot see this radiation as the radiations are in infrared wavelength.

But PIR Sensors detect these radiations and change them into appropriate electrical signals.

A typical PIR Sensor looks like the one shown in the image below. To connect with external devices, it has only three pins namely VCC, Digital OUT (Data) and GND. 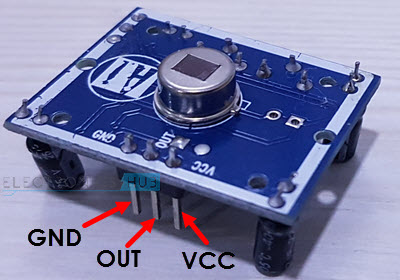 On the top of sensor board, there is a special type of lens called Fresnal Lens that is covering up the actual Pyroelectric Sensor. The job of the Fresnal Lens is to focus all the infrared radiation onto the pyroelectric sensor.

PIR Sensors are complicated than most other sensors. PIR Motion Sensor may seem simple when implemented as all you need to do is check for a HIGH signal on the Digital Out Pin of the Sensor whenever motion is detected.

But, internally, there is a lot going on and the input and output of the sensor are dependent on several variables.

The actual PIR Sensor i.e. the one which is covered with a lens, consists of two slots and both these slots are made up of IR Sensitive materials. Under normal condition where there is no movement in front of the sensor, both the slots in the Sensor detect same amount of infrared radiation.

When there is movement in front of the sensor, like a human or a cat, their radiation is interpreted by one of the slots first and the differential output between the two slots becomes positive.

As the person moves away, the second slot detects the radiation and the differential output will become negative. Based these output pulses, a motion is detected.

Since the Digital Out Pin of the PIR Sensor is either HIGH or LOW based on the movement detected, you can build a simple circuit to test the PIR Sensor.

The first circuit consists of a PIR Sensor and an LED. When the PIR Sensor detects motions, the LED turns ON. The duration for which the LED is ON can be adjusted with the help of Delay Adjust POT. 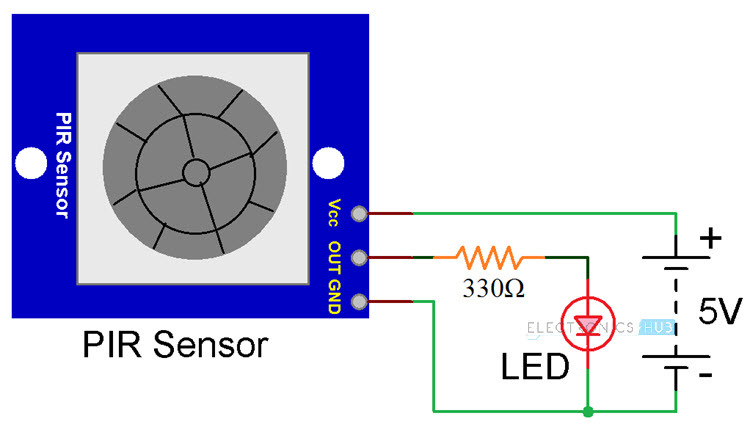 A similar PIR Sensor testing circuit is shown below but it consists of a buzzer. In order to drive the buzzer, an NPN Transistor like BC547 or 2N2222 can be used. The buzzer will be activated when the sensor detects any movement.

Let us make a small Motion Sensor or Motion Detector project using Arduino and PIR Sensor. In this project, the PIR Sensor detects any movement in front of it and signals Arduino. Whenever any movement is detected, Arduino will activate an alarm in the form of a Buzzer.

This circuit doesn’t implement a major design but gives an idea about how to interface a PIR Sensor to Arduino and how to can we Arduino to use the data from the PIR Sensor and drive other output devices or loads like relay, GSM Module, buzzer etc.

The design of the PIR Motion Sensor using Arduino is very simple. The PIR Sensor Module has three pins: VCC, Digital Out and GND. Connect VCC and GND to +5V and GND respectively. Then connect the Digital Out Pin of the PIR sensor to the digital I/O pin 8 of Arduino.

As we need to indicate the detection of motion by the sensor, connect a buzzer to Pin 11 of the Arduino.

NOTE: Buzzer is connected directly to Arduino. I suggest you to connect it through a transistor as shown in the test circuit.

The working of this project is very simple. When the system is powered on, the Arduino waits for the PIR Sensor to be calibrated. The calibration period is set to 10 seconds and during this time, there should be no movements in front of the PIR Sensor.

Arduino will detect this HIGH Signal and activates the buzzer. 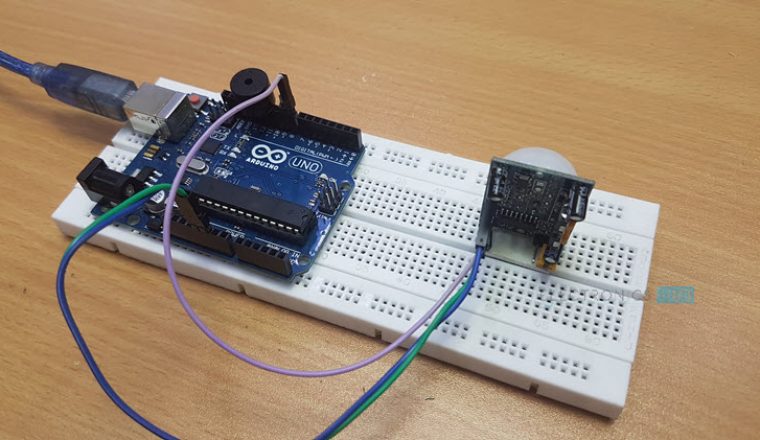 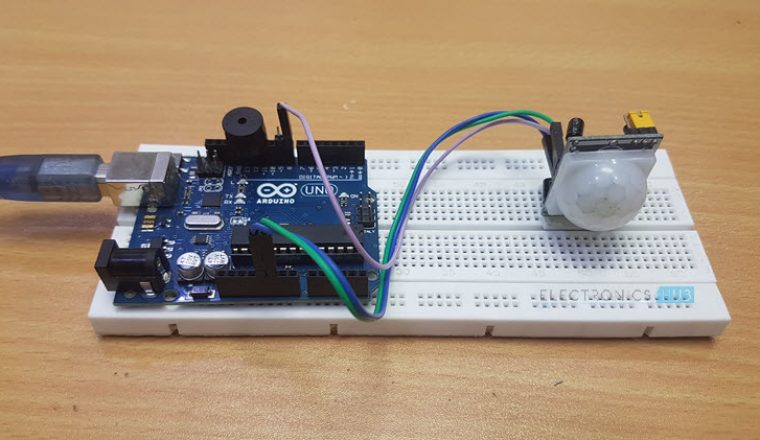 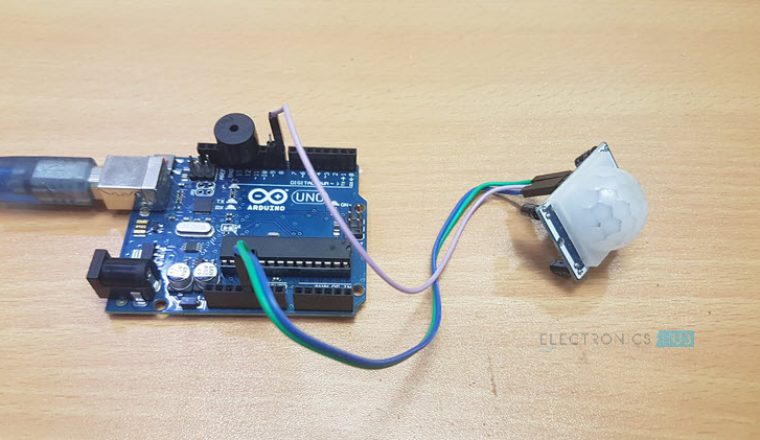