The need for three-phase supply or service occurs when heavy equipments are present such as large motors (beyond 5 HP motors), because such large equipments need high starting and running currents.

Large buildings, plants and offices have greater power requirements than the power used in domestic installations. Therefore, generally they are often installed with three phase wiring or three-phase supply. 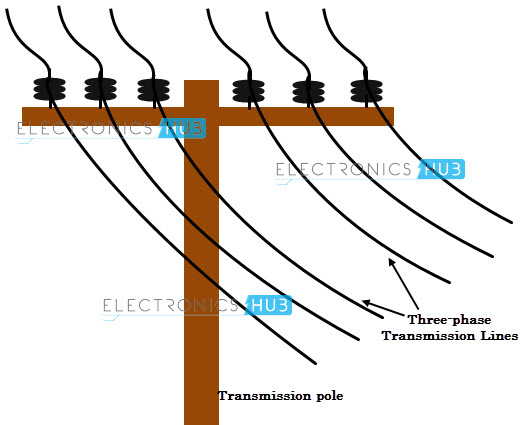 Therefore, it is rarely used for domestic installations, but commonly used in commercial buildings, offices and industrial installations.

Three-phase AC power is generated by a three-phase alternator (also called as AC generators) in the power plants.

This three phase power from the alternators is further transmitted to the distribution end through transmission lines.

The three phase supply from the distribution line transformer is given to the home or building’s point of service. Most industrial and commercial services consists of three phase systems that are operated typically at 415V phase to phase and 230V phase to neutral.

Three-phase systems can be three-phase three wire or three-phase four wire systems. Three-phase 3 line connection consist of three phase conductors and is employed only where there is no requirement for connecting phase to neutral loads.

These connections can be star or delta depending on the secondary of the distribution transformer.

Three-phase 4 wire system is most commonly used connection that consists of three phase conductors and one neutral conductor.

In this three phase wiring, lighting, small-appliance loads and receptacles are often connected between phase and neutral while larger equipments such as air conditioners and electric heaters are connected between two phases (i.e., phase to phase).

Mostly three-phase 4 wire star connection is preferred for connecting both single phase and three phase loads efficiently and in a balanced manner.

Industries or factories are installed with three phase power in order to connect heavy machineries and equipments. Busbars carries this three phase power and from which individual connections are brought out ,to individual loads , through cables. The figure below shows schematic diagram for industrial three phase wiring.

This panel is also included with metering arrangement to display parameters like current, voltage, energy and power. The figure below shows the power distribution from main panel to machinery and lighting loads. 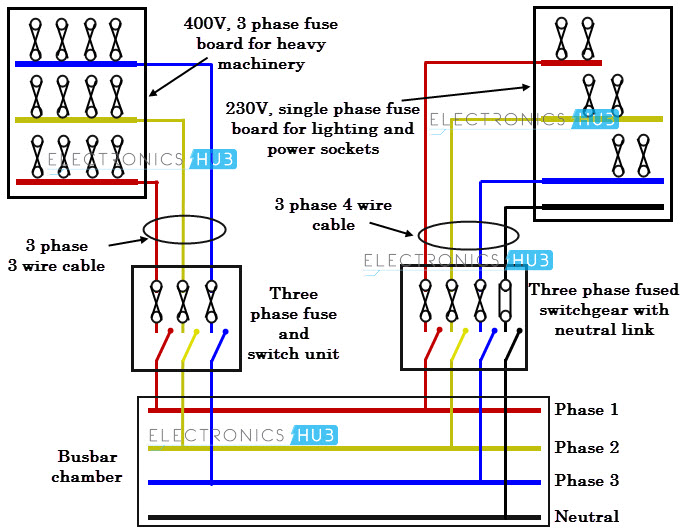 Power from the main distribution board is distributed to heavy machinery equipments as well as to lighting boards with power sockets. The power distributed through single and three phase sub-meters is shown in figure below. 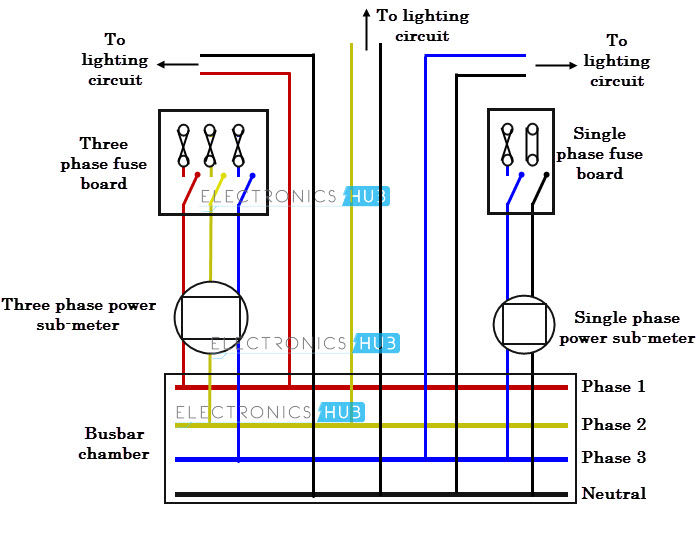 So the single phase loads in the offices or homes must be connected to each phase such that maximum possible load balancing will be achieved.

The main components in the three-phase wiring to home or building or office premises are shown in figure below.
In this, the service entrance conductors are connected to a three phase entrance panel. This panel has a three phase main breaker or sometimes it has three separate cartridge fuses.

This three phase breaker consists of three input lugs to energize three vertical busbars. This main breaker has single handle such that all the loads are powered down simultaneously and also in case of electrical faults, it trips or opens all loads simultaneously. 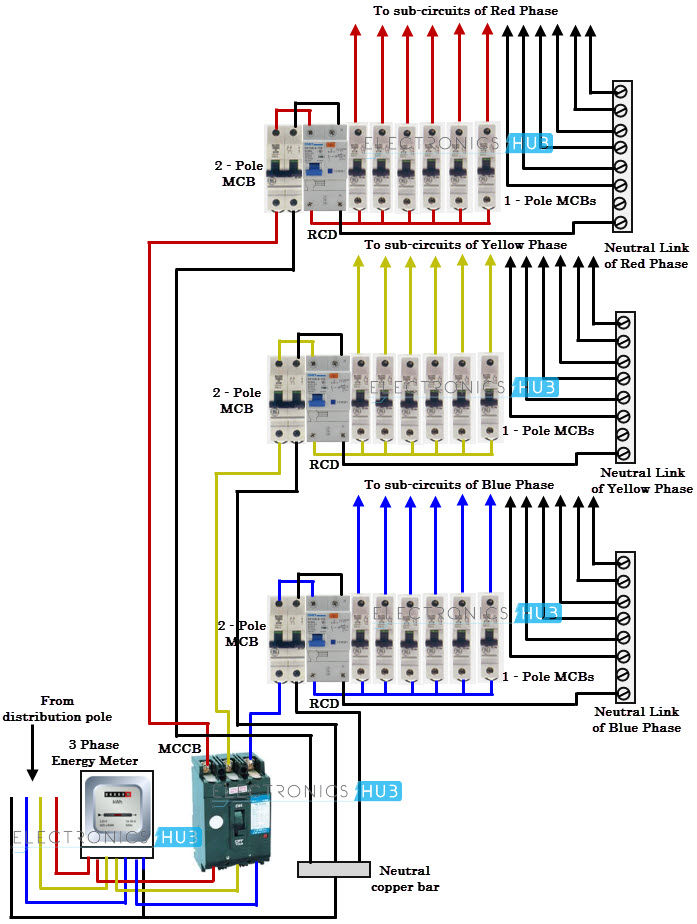 But for three phase loads like motors have to be connected to three phase supply via contactor or breaker arrangement. 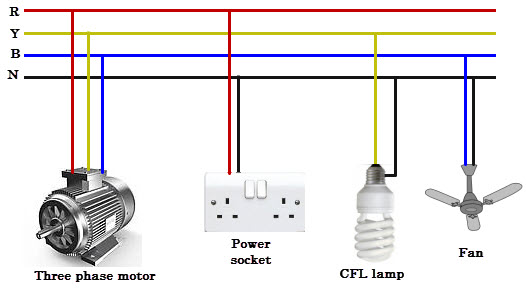 A three pole breaker with an appropriate current rating is used for connecting a three phase motor. Proper care should be taken while connecting three phase wires to the motor because the direction of rotation can be reversed simply by reversing any of the two wires of three phase system.

The wiring diagram for connecting thee phase motor to the supply along with control wiring is shown in figure below. This is a start-stop push button control schematic which includes contactor (M), overload relay, control transformer, and push buttons.

The contactor contains large load contacts that are intend to handle large amount of current. The overload relays protect the motor from overload condition by disconnecting power to the coil of the contactor. 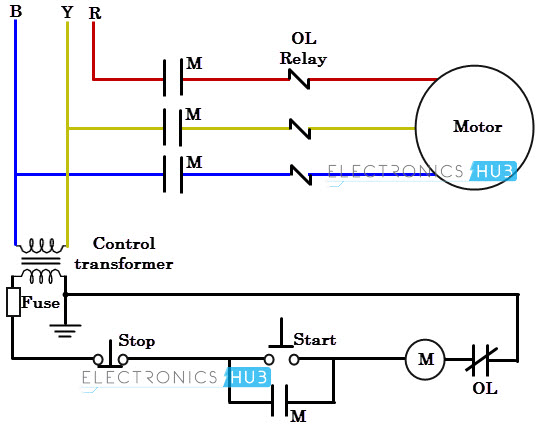 The above mentioned information and diagrams illustrated only for giving basic understanding of three phase power supply distribution to homes and industries.

Instead of concentrating on the values of various equipments, or rating of circuit breakers and other cable sizing, we just gave a brief idea about this topic. Kindly contact us, if you need any further assistance about three phase wiring topic.