A paper battery is basically a device which can act both as a capacitor and as a battery.  It is a flexible, light weight device made up of carbon nano tubes emboldened on paper (cellulose).  It is basically formed by combination of cellulose with carbon nanotubes.  It consists of infusion of carbon nanotubes with paper consisting of an ionic liquid as an electrolyte. 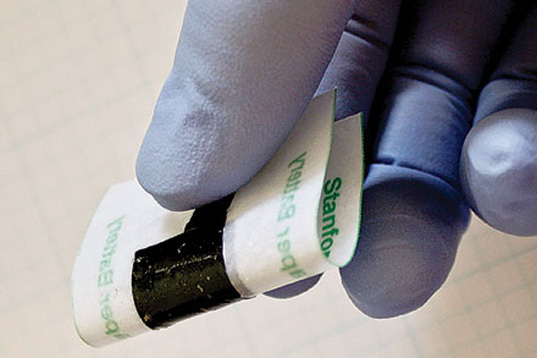 Actually, there are many ways to construct paper batteries.

The first and foremost method of constructing paper batteries was proposed and initiated by Robert Linhardt, a chemist at Rensselaer Polytechnic Institute in Troy, New York. Cellulose (paper) was layered upon conductive carbon nanotubes. Though the combination would be a sturdy material to construct batteries, however problem arose when the materials would fall apart when flexed. A solution was found by Yi Cui, a materials scientist at Stanford University, Palo Alto (California).

He and his team of researchers created an ink of carbon nanotube by suspending them in water and an organic surfactant. This ink was evenly spread on a piece of paper. As the inked paper was heated in the oven to drive off the water, the nanotubes bonded tightly to the paper fibers and a highly conductive sheet of paper were created.

Given below are three ways to create paper batteries:

This paper is infused with aligned carbon nanotubes which are used as electrode. This paper is dipped in a solution of ionic liquid which acts as the electrolyte.

2. The second method is a bit complex and involves growing nanotubes on a silicon substrate. The gaps in the matrix are then filled with cellulose and once the matrix is dried, the combination  of cellulose and nanotubes is peeled off. Thus sheets of paper consisting of layers of carbon nanotubes are created. Two such sheets are combined together to form a super capacitor with a ionic liquid like human blood, sweat or urine being used an electrolyte.

3. The third is a simple method and can be constructed in a laboratory. It involves spreading a specially formulated ink of carbon nanutubes over a rectangular sheet of paper coated with an ionic solution. A thin film of lithium is then laminated on the other side of the paper. Aluminium rods are then connected to carry current between the two electrodes. 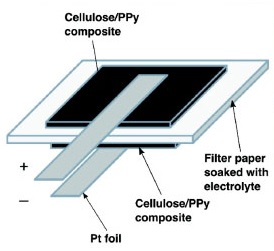 4. The fourth method involves coating substrate of stainless steel with carbon nanotubes. The coated substrate is the dried at 80 degree Celsius for five minutes, after which the material is peeled off. A pair of films are used for each paper battery with each film being pasted to different electrolytes like LTO and LCO. A paper is then sandwiched between the two films using glue. 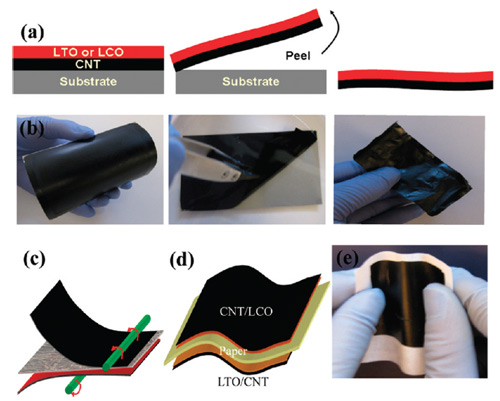 Internal operation of paper batteries is similar to that of conventional batteries with each battery generating about 1.5V.

Similarly in some paper batteries, carbon nanotubes act as cathode, the metal is the anode and paper is the separator.

Six Important reasons How Paper Batteries are Better than their Conventional Counterparts:

Where can Paper Batteries be Used?

Paper battery can actually prove beneficial for applications where portability and size is the main requirement. Modern day electronic equipments like smart cards, digital watches facilitate the requirement of thin batteries which are long lasting and non toxic.

Wearable Computers – One of the latest real time examples of wearable computers is Google Glass.  It actually is a normal spectacle with an optical head mounted display and Glass is a computer in the form of a pair of eyeglasses and includes an optical head-mounted display which allows the user to use a smart phone.

It can also be used for low power devices like calculators, wrist watches and wireless communication devices like mouse, Bluetooth headphones, keypads etc.

What are the Limitations of Paper Batteries?