With the advancement of technology, number of equipment and modern household appliances are increasing to make life easier and comfortable. Operating them manually is a tedious job and hectic sometimes.

Life will become simpler if we can control devices like TV, fan, light or a music system with a remote from a distance just by pressing the button.

This project deals with an interesting manner of automating the home appliances with the help of RF Communication Technology.

Principle behind the project

The principle behind the RF based Home Automation circuit is based on the RF Communication between the RF modules.

RF Communication between the Transmitter and Receiver modules works on the principle of Serial Communication, which means the RF transmitter will send the data serially to the RF Receiver which is paired to it.

The microcontroller will turn ON or OFF the loads according to the button pressed.

Also see How to interface RF Transmitter and Receiver Modules 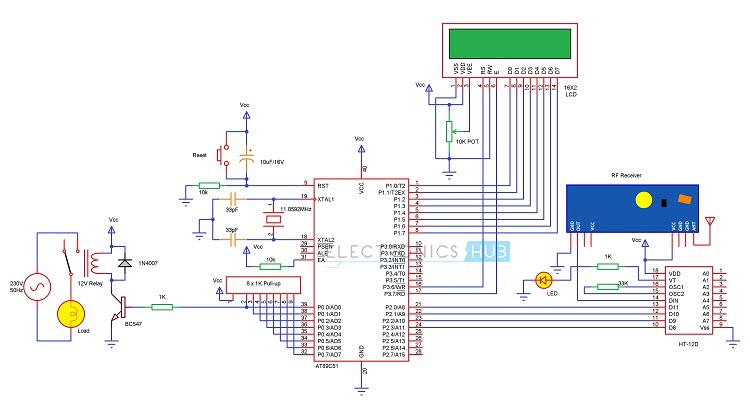 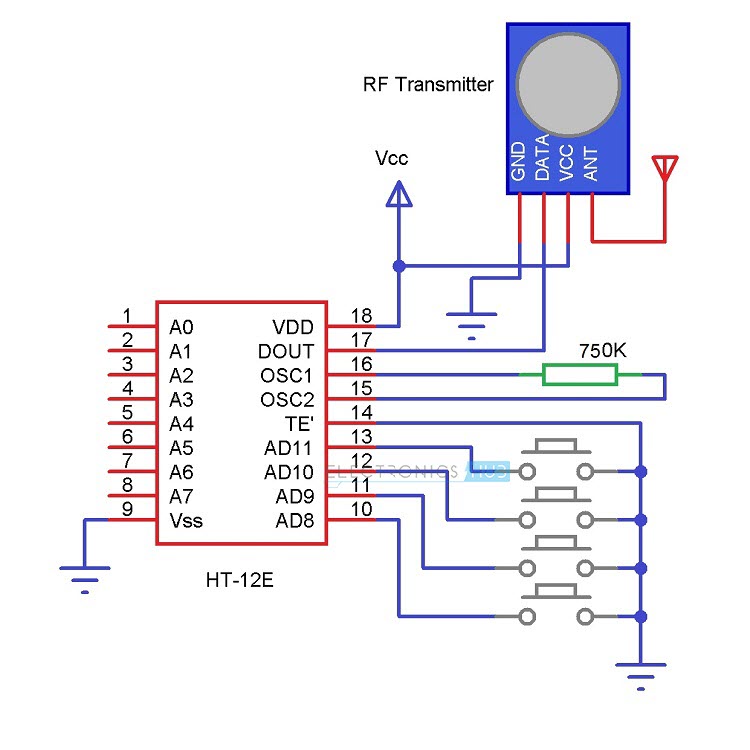 The main component of the RF based Home Automation is the RF Module. An RF Module is a small electronic circuit which is used to transmit or receive data wirelessly.

RF Modules are often used in consumer applications where you need to remotely control some machines or appliances without making any physical contact with them.

RF modules do not require line-of-sight operation. Hence, they are often used instead of infrared remote controls.
Depending upon the type of application, the RF module is chosen.

For example, in case of short range wireless control applications, we can use ASK modulated RF Module of frequency 315 MHz or 433 MHz.

Here is the Pin Configuration of the RF Transmitter and Receiver Modules. 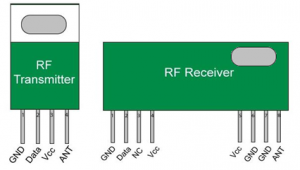 RF Communication between the Transmitter and Receiver modules works on the principle of Serial Communication. In order to transmit or receive the data serially through RF module, we need to interface two ICs named HT-12E and HT-12D.

The HT-12E is an encoder IC which is used with the RF transmitter for encoding the conventional n-bit data i.e. 4-bit, 8-bit or 16-bit data in to serial data for data transmission.

Here is the pin configuration of this IC. 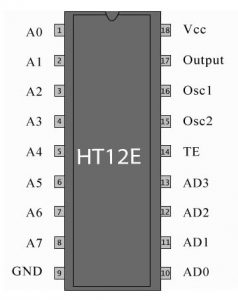 This encoder IC has 2^12 series encoders integrated in it. This IC is mainly used in RF communication. This IC converts 12-bit parallel data to serial data. Out of the 12 bits, 8 bits are the address bits and 4 bits are data bits.

The HT-12D is a serial decoder IC which is used with RF receiver for decoding the received serial data back to original parallel data.

Here is the pin configuration of this IC. 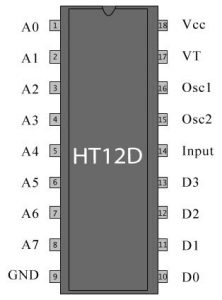 Similar to the encoder IC, the HT-12D Decoder IC has 2^12 series decoders integrated in it. It can decode 12-bit serial data of which 8 bits are the address and 4 bits are the data bits.

Read this interesting Post on: RF Controlled Robot without Microcontroller

How to Design RF based Home Automation Circuit?

The main components of the project are 8051 based microcontroller, 16×2 LCD, and RF Transmitter and receiver modules.

First we’ll see the connections with respect to the microcontroller. In that, first is the clock. To use the on-chip oscillator, an 11.0592MHz quartz crystal is connected to XTAL1 and XTAL2 pins. Two 22pF ceramic capacitors are used with the crystal.

The reset circuit consist of a resistor, a capacitor and a push button. A 10KΩ resistor is connected from the RST (Pin 9) of the microcontroller to ground. A 10µF electrolytic capacitor is connected between the positive supply and RST pin.

A push button is connected across the capacitor. Upon pushing the button i.e. applying a high pulse to RST pin, the microcontroller will reset.

The External Access pin (Pin 31) is pulled high using a 10KΩ resistor. This completes the basic connections with respect to microcontroller.

Now we’ll see the connections with respect to other devices. In that, first is the LCD display. A 10KΩ pot is connected to contrast adjust pin (Pin 3) of the LCD to adjust the contrast of the display.

An LED is connected to VT pin of the decoder IC to indicate valid transmission of data.

A 33KΩ resistor is connected between the OSC1 and OSC2 pins of the Decoder IC in order to complete the internal oscillator.

The 4 data pins of the decoder are connected to Port0 of the microcontroller. But in order to use Port 0 as I/O port, it must be connected to a pull-up resistor.

A 750KΩ resistor is connected between the OSC1 and OSC2 pins of the encoder IC to complete the internal oscillator.

In order to transmit the data, the transmission enable pin (Pin 14) of the Encoder IC must be connected to ground.

The aim of this project is to design an RF based Home Automation system using 8051 microcontroller, in which different home appliances are remotely controlled using RF technology. Now we’ll see the detailed working of the project.

For the proper working of this project, the RF transmitter and receiver modules are switched ON before turning on the microcontroller. This is to avoid the junk data , received by the receiver module , when it is pairing with the transmitter.

Once the modules are successfully paired, the LED attached to VT pin of the receiver module will glow. From now onwards , the data out pins of the decoder will continuously give logic high as there is no button pressed in the transmitter.

Once we turn on the microcontroller, all the loads connected to it are switched OFF as it receives logic high continuously from the receiver. The status of the loads is displayed on the LCD.

If the same button is pressed once again, the microcontroller will turn OFF the load.

Limitations of the Circuit