You are here: Home / 70+ LED Projects and Circuits for Engineering Students

LED (Light Emitting Diode) is a two terminal semiconductor device. The functionality of LED is as same as normal diode but it emits light when current passes through it. It is used in most of the electronic circuits as a sign or visual representation to the normal human to know that circuit is working properly. We have lot of applications using LEDs. They are used in advertisement hoarding, Electronic devices, displays, night lamps, etc.

Electronics hub is now listing out below some of the best LED based projects and circuits which we can do at home. All these circuits have been tested theoretically and published along with Schematics, Circuit Diagrams, Applications, Advantages, Limitations and the detailed explanation about circuit for each of them. We think these are very useful for many electronics engineering students in selecting the LED based projects and circuits very easily. 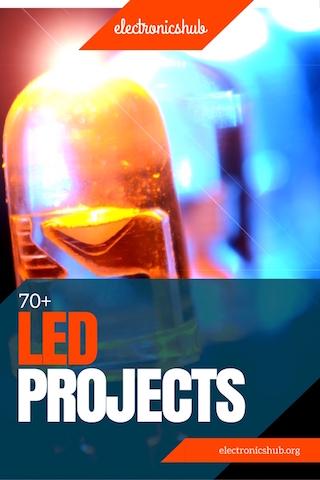