You are here: Home / 100+ Embedded Systems Projects for Engineering Students

Nowadays we regularly hear about one of the most important concepts in electronics, that is Embedded Systems. What is embedded systems? Why many people prefer embedded systems in these days?

Many engineering students show lot of interest to do the projects based on embedded systems in their final year. For their purpose, we have listed here some of the best embedded systems projects ideas which are all very helpful to get an idea about what type of projects that they can choose in engineering level. This list includes many 8051 Microcontroller Projects, PIC Projects and AVR Microcontroller projects. Some of the examples of microcontroller based projects are water level controller using 8051, Propeller LED display, Automatic Railway Gate Controller with High Speed Alerting System, Metal detector robot, Biometric attendance system, etc. 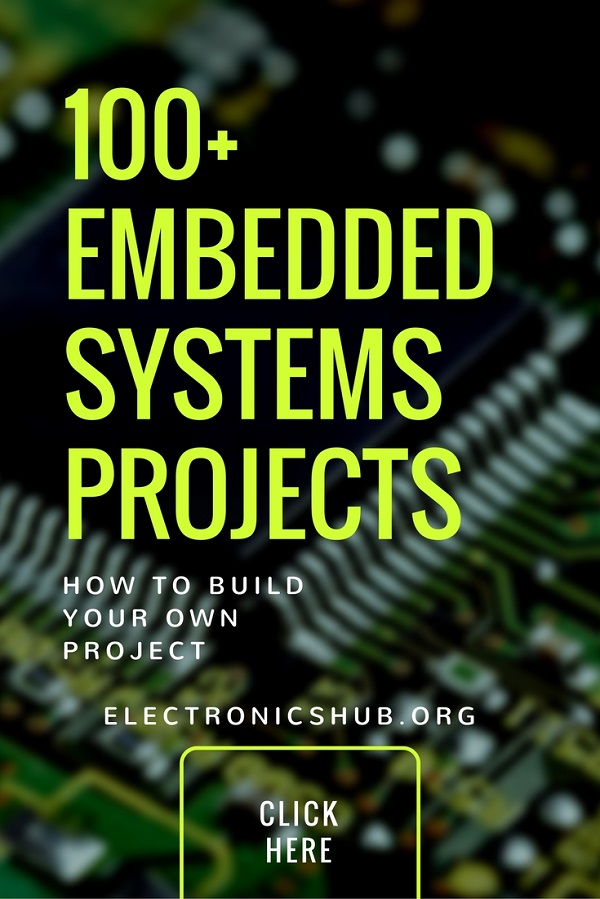 Let us see a brief explanation about the above mentioned projects.

Propeller display is a linear array of LEDs, rotating at high angular velocity to generate a circular screen.
This “illusion” is based on inertia of human eye. In this project we rotates a set of LEDs for displaying characters, numbers and symbols in a rotating manner, that is the reason to call the system as a propeller LED display. The rotating light emitting diode display can be disc shaped or cylindrical shaped. Cylindrical displays are capable of displaying digits and text. Disc-shaped displays are used to display analog clock. Propeller LED display is a mechanically scanned device that displays characters in a digital format. Propeller display are used in digital and analog clocks, also used to display the messages.

In this project we develop a robot, which can sense the metals ahead of it on its path. In this project robot is controlled wirelessly using RF technology. A metal detector is interfaced to robot that alerts the user when there is a suspected land mines metal ahead. At transmitter end 4 push buttons are used to control the movement of the robot. For each push button a separate command is sent to the receiver to control robot directions. If any suspected metal is detected, then robot stops there and gives the buzzer. Get more information about this project in the post – Metal Detector Robot.

In any institute or organization it is necessary to take the attendance for consistent regulation and payment. Taking attendance manually requires more time and paper work. To solve this problem automatic attendance using finger print was developed. This finger print based attendance system is also called as Biometric attendance system. Biometrics is the technology used for authentication. Biometric refers to automatic identification of a person based on biological characters such as finger print, iris, etc. This system works based on the fact that no 2 persons will have same finger print in the world. Read the post – Biometric Attendance System to get more information about this project.

Here is the list of some more important embedded systems projects along with their detailed information. These are very helpful for final year engineering students. You may once check this list of projects and you may write your opinions, new ideas, suggestions and feedback also in contact us page.

Are you interested to know about any other project ideas? Then visit the following pages: