Flame Sensors, Smoke Sensors, Fire Alarms etc. are part of a safety equipment that help us in keeping our homes, offices and stores safe from fire accidents.

Almost all modern houses, apartments, malls, cinema halls, theatres, office buildings and shops are equipped with such safety equipment and it is mandatory in some regions to fire safety devices. 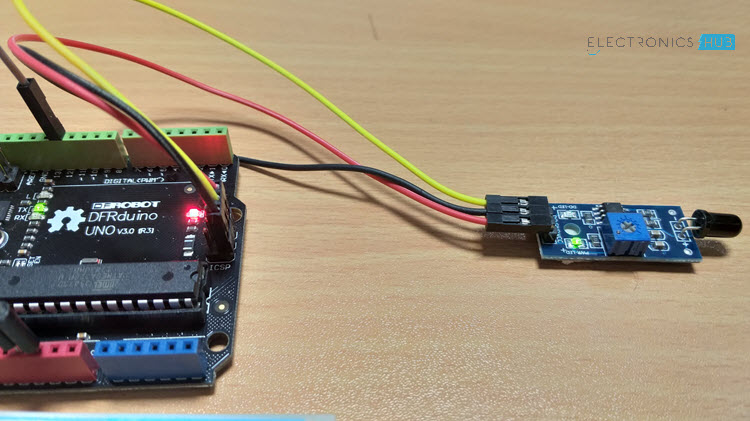 Commercial fire safety devices are advanced with a lot of complex circuitry. If you want to implement a DIY Fire or Flame detection application, then this project might be helpful.

Warning: This project is just to give you an idea on how to implement a simple Flame Sensor using Arduino Platform and we do not guarantee its commercial applications.

Following is the output video of the Flame Sensor Project.

A Brief Note on Flame Sensor

A Flame Sensor is a device that can be used to detect presence of a fire source or any other bright light sources. There are several ways to implement a Flame Sensor but the module used in this project is an Infrared Radiation Sensitive Sensor. 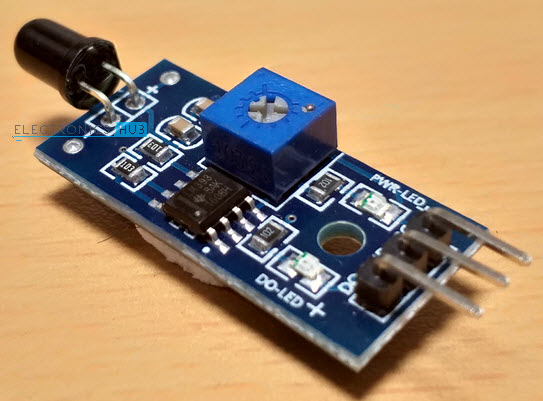 The YG1006 Photo Transistor looks like a black LED but it is a three terminal NPN Transistor, where the long lead is the Emitter and the shorter one is the collector (there is no base terminal as the light it detects will enable the flow of current).

Using this particular type of Flame Sensor, you can detect Infrared Light up to a distance of 100cm within its 60 degrees of detection angle.

There are two types of implementations of Flame Sensors using YG1006 Photo Transistor: one is with both Analog Output and Digital Output while the other is with only the Digital Output.

Both these implementations require same components but the difference is that one module (the one with the Analog Output) provides the Sensor output as Analog Output.

The Flame Sensor that I am using in this project has only Digital Output.

NOTE: In the circuit diagram of the Flame Sensor, I have pointed out where to get the Analog Output if your module doesn’t have that option.

The following image shows all the components of a typical Flame Sensor Module. 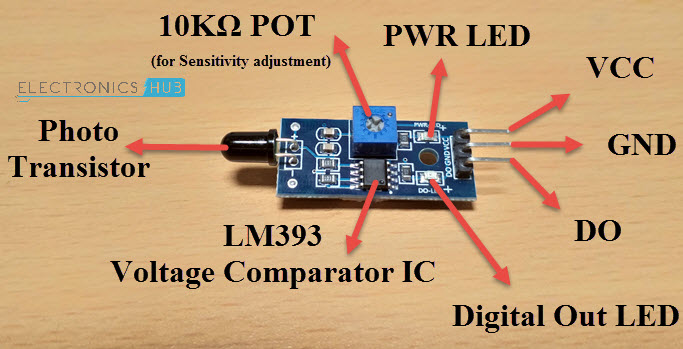 If you want to know a little bit more about the Flame Sensor Module, then analyzing its circuit will probably help you. The following image shows the circuit diagram of a Flame Sensor.

Whether you are using either of the Flame Sensors (with or without Analog Output), interfacing it with Arduino (or any other Microcontroller) is very easy. Since I do not have an Analog Output, I won’t go into that details.

By interfacing a Flame Sensor with Arduino, you can detect fire and activate a Buzzer (simple and easy implementation) or any other emergency safety measurements (like activating a sprinkler system or shutting off gas valves etc.).

The following image shows the circuit diagram of the Arduino Flame Sensor Interface. 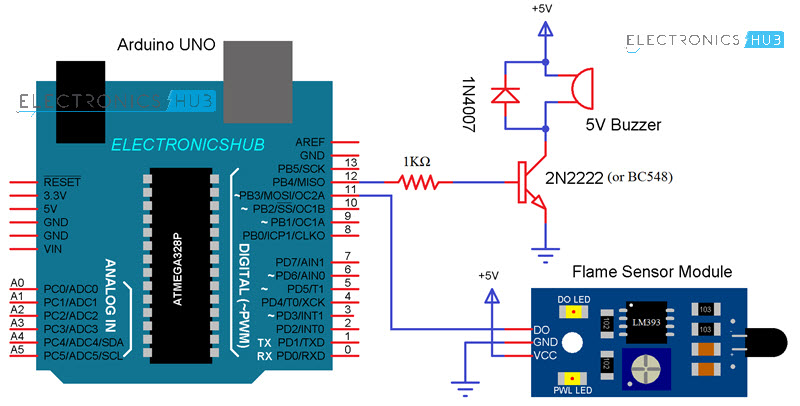 Flame Sensor has three pins (some may have four pins): VCC, GND and DO. Connect VCC and GND to +5V and GND of the power supply (can be connected to Arduino’s +5V). the DO (short for Digital Output) is connected to Digital I/O Pin 11 of Arduino.

In order to indicate the detection of a flame or fire, a Buzzer is used. The Buzzer circuit consists of a 1KΩ Resistor, an NPN Transistor (like 2N2222 or BC548), a 5V Buzzer and a PN Junction Diode.

The Buzzer is driven through Digital I/O 12 pin of Arduino UNO. 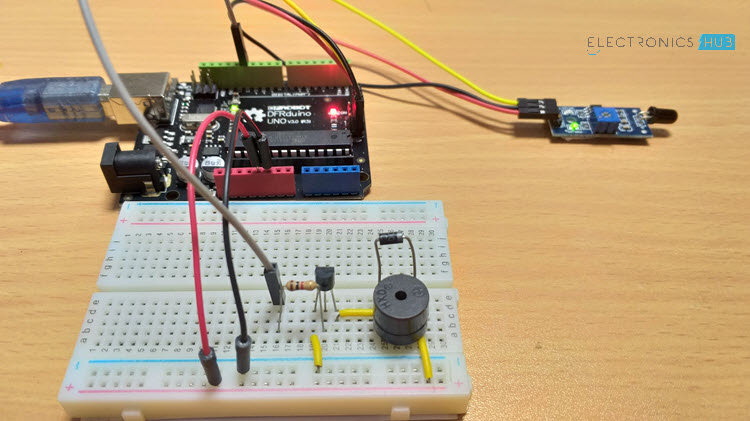 NOTE: The Buzzer circuit is a safety measure and is not mandatory. You can connect the Buzzer directly to Arduino.

The code of the Arduino Flame Sensor is very simple and is shown below.

Make the necessary connections and upload the code to Arduino UNO. To test the functionality of the flame sensor, place a fired lighter or a match stick in front of the sensor.

Under normal conditions, the output from the Flame Sensor is HIGH. When the sensor detects any fire, its output becomes LOW.

Arduino detects this LOW signal on its input pin and activates the Buzzer.

NOTE: The on-board 10KΩ Potentiometer can be used to adjust the sensitivity of the sensor.

Flame Sensors are very important devices in detecting fire and they can be used in a variety of applications/areas like: